To share your memory on the wall of Agnes Palmer, sign in using one of the following options:

She was born in Farmington, New Mexico, on December 26, 1934, to Willard H. and Mable Otis Head. Agnes had an older brother, Otis (deceased), and a younger sister, Charlene Thompson of Columbus, Mississippi.

The family moved many times during her childhood due to her father’s work with the BIA (Bureau of Indian Affairs), including multiple moves to the Navajo Indian Reservation. Later, her parents bought a farm in Fruitland, New Mexico, where there were fruit trees to pick, a cow to milk, pigs to slop, and eggs to gather. One of Agnes’s jobs at the end of the day was to walk down to the river and guide the cow back up to her corral. These were fun years but hard work, too!

Later in life, Agnes went back to college to earn her degree. She graduated from New Mexico State University in 1967, with a degree in Home Economics. After graduation, Agnes taught junior high school for two years before being hired as the County Home Economist for San Juan County, New Mexico. Agnes loved her work with the county extension office and the traveling and many new friends that came with it. After retirement, Agnes and Lloyd bought an RV and traveled around the country. They enjoyed these years very much, as they traveled around seeing family and friends. Agnes was an excellent cook and also enjoyed sewing, gardening, reading, doing crossword puzzles, and playing solitaire.

Memorial services will be held on Saturday, June 5, at 10:00 A.M. in the LDS chapel at 1650 S. 200 E. in Orem, Utah.
Interment will take place at a later date in Farmington, New Mexico. Condolences and memories may be shared with the family at www.walkersanderson.com
Read Less

Receive notifications about information and event scheduling for Agnes

We encourage you to share your most beloved memories of Agnes here, so that the family and other loved ones can always see it. You can upload cherished photographs, or share your favorite stories, and can even comment on those shared by others. 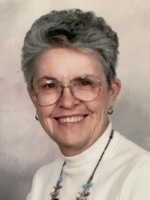