To share your memory on the wall of Anette Tobler, sign in using one of the following options:

Print
Anette Pendleton Tobler, 94, of American Fork, Utah, passed away on 25 January 2021 at her home.

Anette was born at her Grandparent’s home in Washington, Utah to Anthony and Zella Pendleton on July 18, 1926. She attended elementary, high school and Jr. College at St. George, Utah. She graduated from Dixie Jr. College with an associate degree in science. She married Harold Dale Tobler on November 9, 1946 in St. George, Utah in the St. George Temple. She was a wife, mother of six children and helped in her husband’s accounting business. She was active in the Church of Jesus Christ of Latter-day Saints including serving as Primary President, Relief Society Counselor/Secretary and Visiting Teacher. She was loved by all who were acquainted with her because of her sincere concern and interest in those she knew and met. She was sensitive to others needs, especially within her family. Family was the most important thing in her life; her love was ‘a love without end’.

Memorials may be given to the Hospice organization of your choice.

The family of Anette wishes to extend our sincere thanks for the services provided by Walker-Sanderson Funeral Home in Orem, Utah; to the staff at Dignity Home Health & Hospice of American Fork, Utah; Home Instead Senior Care of Provo, Utah; Mom’s friends at Mount Timpanogas Village Retirement Community; Her Ministering sisters, family members and all who helped to care for and allow her to stay in her home. It was her desire at the time she moved from Las Vegas, Nevada [where she had lived and raised her family for over 50 years] to American Fork, Utah in 2012, that she would not have to move again. Her health allowed her to live independently until this last year. Our family has been so very blessed by her life.
Read Less

Receive notifications about information and event scheduling for Anette

We encourage you to share your most beloved memories of Anette here, so that the family and other loved ones can always see it. You can upload cherished photographs, or share your favorite stories, and can even comment on those shared by others. 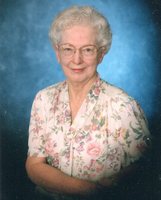