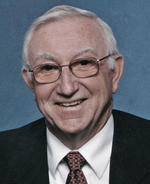 Barry Lee Fillmore, 82, died peacefully at his home in Provo, Utah, on January 15, 2022, after a long and well-endured battle with Alzheimer’s Disease. He was born in Spanish Fork, Utah, on October 10, 1939, to Elmer Lee and Gwendolyn Wride Fillmore.

He was the second of seven siblings who grew up in a home attached to a small gas station and grocery store operated by their parents on Canyon Road in Spanish Fork. At Spanish Fork High School, Barry played the coronet in the marching band.

In 1958 he enlisted in the United States Navy where his high school experience allowed him to be part of the drum and bugle corps during boot camp in San Diego. From there he went on to train as an aircraft mechanic and ended up serving on aircraft carriers, including the USS America. One of his tours of duty took him around the globe. Later in his Navy career, he worked in recruiting and retention. He retired in 1978 as a chief petty officer.

Barry was always kind and cheerful and made friends easily. Among his closest friends are several who served with him in the Navy.

While stationed in Hawaii, Barry met Jane Swift. They were married in 1962 and were sealed in the Los Angeles Temple in 1963. They are the parents of three children: Jeffrey Lee, born in San Diego, California; Maria, born in Honolulu, Hawaii; and Eric Royce, born in Kingsville, Texas. This tour of hospitals was part of the travail of a military wife.

Upon retirement from the Navy in 1978, the Fillmores settled in Provo, Utah, where Barry earned a bachelor’s degree in Recreation Management from Brigham Young University. Early in his Navy days he was a scoutmaster in Coronado, California. That led to 40 years with Scouting, training at Wood Badge, and he was recognized with the Silver Beaver award from the Boy Scouts of America.

Following graduation from BYU, he worked with the Handicapped Awareness program, and then became the warehouse manager for Community Action Food Pantry in Provo. After 11 years in that position Barry retired again.

Following three church service missions in Provo and St. George, Barry and Jane were called as full-time missionaries for The Church of Jesus Christ of Latter-day Saints, which took them to Gallup, New Mexico, assigned to LDS Family Services working with the Navajo and Zuni tribes.

Interment with full military honors will take place at the Spanish Fork Cemetery, 420 South 400 East, following the services. There will be a luncheon for family at the Provo Grandview Stake 9th Ward Chapel, 1555 North 1350 West, following the burial . Anchors Aweigh, Barry

In leu of flowers please consider a donation in Barry's name to Community Action of Provo Food Bank, Latter-day Saints Charities or a charitable organization of your choice.