To share your memory on the wall of Benjamin Bean, sign in using one of the following options:

In the early morning hours of November 22, 2020 as Ben took his last final breath, all of the rainbow trout in the Provo River breathed their own sigh of relief.

Benjamin Willes Bean was born to Bryan and Echo Bean in Salt Lake City, Utah on Feb 23, 1946, along with his twin sister Bonnie. Benny loved growing up in the foothills of Salt Lake City. He was a shy quiet boy, though he loved teasing Bonnie and their older sister Nancy and made plenty of mischief with his neighbors and cousins. He developed a passion for fishing from a young age, joining his cousins as they fished in Provo Canyon or Montana.

Ben served a mission for the Church of Jesus Christ of Latter-Day Saints in the North-Western states, where he learned to conquer his shyness and reach out in friendship to anyone he met, a skill he kept throughout his life. After his mission, Ben attended the University of Utah, where he majored in accounting and met his sweet wife, a “Murray girl” named Laurel Johnson. He knew he loved her from the moment she shared her orange soda with him on their first date. They were sealed in the Salt Lake temple on March 19, 1970 and together they built a beautiful family that became their pride and joy. They chose the best neighborhood in Orem, Utah to raise their children with friends who became family. Ben was a beloved primary teacher, scout leader, and dedicated home teacher who would drop anything to lend a hand or teach someone to fish.

Though a proficient accountant, Ben found teaching to be the best career for him. He loved working at UVU for many years, befriending his students and committing himself to their success.

If Ben loved anything more than fishing or teaching, it was being a grandpa. He would go to any lengths to find new ways to make his grandkids smile and he was incredibly proud of each of them.

Ben was preceded in death by his parents, his half-brother Bob (Yutonna) Bean, and his sister, Nancy. He’s gone ahead to prepare the way for his devoted wife, Laurel and their six children, Joel (Natale) Bean, Laura (Dan) Stromberg, Tom (Cindy) Bean, Andy (Kirsten) Bean, Suzie Bean, and Ashley (Jordan) Hix, his 17 adoring grandchildren, 1 grandchild in-law, as well as his sister Bonnie, his brothers and sisters in-law and many nieces and nephews who loved Ben dearly, but more importantly knew without a doubt how much Ben loved them.

A private family service will be held on Wednesday, November 25 at 12:00 noon. This will be broadcast live on the funeral home website at www.walkersanderson.com Juatt click on the live webcast and will also be available to watch later.

In lieu of flowers, please make a donation to your favorite local charity in honor of Ben.
Read Less

To plant a memorial tree in honor of Benjamin Bean, please visit our Heartfelt Sympathies Store.

Receive notifications about information and event scheduling for Benjamin

We encourage you to share your most beloved memories of Benjamin here, so that the family and other loved ones can always see it. You can upload cherished photographs, or share your favorite stories, and can even comment on those shared by others.

Posted Nov 25, 2020 at 03:11pm
Dear Laurel -
I just watched the live broadcast of Ben's funeral which was so uplifting. The tributes of each of your children were beautiful and I loved hearing of his impact on each of their lives and the grandchildren. You were and are so precious to Ben and I know you will feel him close to you in the coming days. Ben was a great example to Len and me of a true Christlike friend. How blessed our lives have been to have known him.
Love to you and your dear family - Elaine Ellis

Posted Nov 24, 2020 at 11:40am
Laurel and family, I'm so sorry for your loss. Ben was such an awesome, example to those around him and always had a kind word. We will all miss him.
Comment Share
Share via: 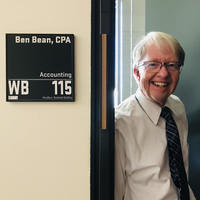