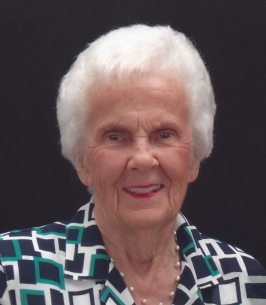 Beverley Nalder, our loving cousin and dear friend, passed away on March 12, 2022 of natural causes. She was 91 years old. Bev was vital and active all of her life, even riding a three-wheeled, two-seated bicycle through her neighborhood while in her 80’s, and regularly riding her own stationary bike at home every morning until just a few short weeks ago.

Beverley was born on August 14, 1930 in San Francisco, California to Claude W. and Mabel Martin Nalder. Her childhood was spent living in a “flat” near Golden Gate Park in the “panhandle” of San Francisco. Her father was the LDS Bishop for their area and worked in a funeral home nearby. Her mother stayed at home with the children while they were young: Martin, the oldest, Beverley, and Nadine, Bev’s younger sister. Bev was very close to her siblings and, as children, they would ride their bikes to the park, roast hot dogs on the beach, and enjoy ten-cent movies (including a candy bar) on Saturdays. Bev rode a streetcar to school each day with her neighbor friend. On vacations, her family visited her Nalder grandparents in Inglewood, CA. Bev loved riding in the rumble seat of her grandpa’s car to a nearby park where they would run through the sprinklers, and then, in wet clothes, stand on the car’s running board all the way home. She especially loved the extraordinary and fresh breakfasts her grandma would prepare, and Bev, herself, became a very good cook, with interests in healthy recipes and kitchenware all her life.

In high school, Beverley excelled in sports and was President of the Girls Athletics Club. She dated widely and enjoyed her neighborhood friends. Following graduation, she was accepted to Brigham Young University and traveled there by bus from her home in San Francisco. Living in Allen Hall, she made friends easily and graduated with a major in Sociology, which provided a satisfying career for her throughout her life. She furthered her education, pursuing a master’s degree at the University of Utah so that she could ensure her own security and support. Provident and independent living were important principles to Bev, and she knew the value of an education. She loved learning new skills and could handle minor home repairs as well as a full reroofing of her first home in Orem.

When Bev was attending the U of U, she received a scholarship from The Church of Jesus Christ of Latter-day Saints to do field work in adoption and support of unwed mothers. She helped place adoptive babies throughout Utah and assisted unwed mothers. This work ignited her lifetime love and compassion for those who struggle and need help. Subsequently, for several decades of time, she helped offer scholarships to students at BYU, Provo High School, and LDS Business College, enabling hundreds of single mothers and other students to finish their college studies.

Beverley’s social work career took her from Salt Lake City to San Mateo County, California as a probation officer, to Los Angeles County’s Welfare Department, and then to LA’s Big Sister League, another entity helping single expecting mothers to prepare for their child and to finish their education. She worked with these mothers during the day and, to earn additional money at night, she drove them to the hospital to deliver their babies. Bev was then offered a position at BYU in Counseling Services, a job she loved into retirement. She worked with students and faculty to help them understand and resolve their concerns. She also taught Sociology courses at BYU. So that she could better understand mental health, Beverley admitted herself for a few days to the Utah State Mental Hospital. There, she realized that patients who were not meaningfully involved in productive ways during the day became more agitated and frustrated. Her resulting influence improved the daily lives of patients at the hospital.

Beverley could start a conversation with anyone, and she was sincerely interested in understanding others and learning about their lives. She was a beloved neighbor in her community and a close, devoted friend to Ramona Morris, with whom she shared a home for many years. Their worldwide travels were legendary and even included Antarctica and a trip around Cape Horn. Cruising was Bev’s favorite travel choice as she loved eating good food, visiting great sights, and meeting people everywhere she went. She easily loved people of every background, and they loved being with her as she was ever kind and accepting. In 1975, Bev and Ramona hired a group to build a cabin in the Manti-LaSal mountains above Mt. Pleasant, and their getaways there with family members and friends provided some of their happiest moments in life. Bev had a charming smile, a radiant and beautiful face, and a quick, self-deprecating wit that made her company delightful!

Bev and Ramona hosted an annual popcorn party for dozens of family members, friends, and neighbors during the fireworks show of Orem’s “Family Days,” held in the nearby city park. They also served for many years at the Missionary Training Center in Provo, counseling young missionaries going out or returning home. Bev and Ramona loved being volunteer hosts at the speed skating oval in SLC during the 2002 Winter Olympics. Intrepid adventurers and service-oriented in all they did, the two served as Compassionate Service Leaders in the Sharon Park 5th Ward while in their 80’s. Bev served in various Church capacities throughout her life and regularly visited neighbors without calling or assignment. As a matter of her sweet humility and unwavering faith in God, Bev often talked of trying to listen to the Lord in prayer as she made decisions and choices.

Beverley knew loss in her life. Her father died unexpectedly while serving as a mission president in the Central Atlantic States Mission. Her brother, Martin, passed away at age 52, and her mother died six years later. Just a few years following that, her younger sister, Nadine, died of cancer while living with Bev, who cared for her in her final days. Bev inherited her family’s assets, but true to her belief in lifting others up, she continued to live on her own budgeted salary, and donated the inheritance to scholarships for single mothers, a transformative gift in the lives of the recipients. Bev could not talk about these scholarships without shedding tears of joy for the blessings she felt she had received from this work. She and Ramona were acknowledged for their service over the years by BYU President Cecil O. Samuelson, The Church of Jesus Christ of Latter-day Saints, and by the Governor of the State of Utah.

Bev surrounded herself with more than a dozen lifelong friends, who often gathered for dinners and traveled together for over 55 years. This tight-knit group included Marilyn Arnold, Carolyn Rasmus, Kathy Luke, Patti Harrington, Rosemarie Smith, Diane Chamberlain, Linda Palmer, Renée Van Buren, Janet Cooper, Nancy Barton, Gloria Stratton, Janice Piccolo, and Ramona Morris. Bev’s dearest friend, Ramona, died of Alzheimer’s disease in 2018, a deep loss for Bev and her group of friends. Bev also loved her family dearly, and found joy in their activities, interests, and achievements. She stayed close to her cousins and their children and grandchildren, many of whom were with Bev when she died. She was particularly blessed by the extraordinary service of Julie and Cameron Martin, and Rob and Robin Harker, who kept vigil over her in her final days, helped her clean and sell her home, and added so much joy and activity to her many years of life at home in Orem, at the cabin, and in their own homes for family dinners and celebrations.

Funeral services will be held on Saturday, March 19, 2022 at 11:00 a.m. at the Church of Jesus Christ of Latter-day Saints chapel located at 225 East 200 North in Orem, Utah. A viewing will be held before the funeral from 9:30-10:45 a.m. Beverley will be interred at the Orem City Cemetery. In lieu of flowers, donations can be made to BYU’s Tender Mercies Scholarship Fund at: https://donate.churchofjesuschrist.org/donations/byu?funds=30123200&

The funeral services will be live-streamed at www.walkersanderson.com Saturday, March 19 at 11:00 a.m.