To share your memory on the wall of Bonnie Scadlock, sign in using one of the following options:

We announce the passing of our beloved Mom, Bonnie Gene Scadlock (Snarr) on Thursday November 19, 2020 . We honor her and the exemplary life she lived and feel comfort in knowing that she and our Dad are together once again. Although those of us that are left behind feel the pain of separation, we experience great joy in knowing our parents are celebrating and dancing together once again.

Bonnie Gene was born on May 30, 1927 in Portland, Oregon to William Calvin Snarr and Ruby Melinda Cook. She was an only child but felt the love and warmth of family throughout her life through her association with her beloved cousins Gloria Rae Moser Nixon (Olsen) and Alonzo Y. Olsen Jr.

Mom spent most of her growing up years in Southern California. She graduated from Southgate High School and shortly thereafter met the love of her life, E. William Scadlock, a handsome young man recently returned from serving in the U.S. Navy during the final three years of WWII in the Pacific conflict.

On September 12, 1946, Bonnie and Bill were married in Huntington Park, California and a week later on September 18, 1946 they were sealed for time and all eternity in the Mesa, Arizona Temple.

After their marriage they settled in Southgate, California where Mom worked for the Southgate Water Department and shortly thereafter, she became the private secretary to the owners of Advance Neon Sign Company, where Dad also worked. Several years later they were blessed with their first child, Janet Lynn (Miller) who was followed by James William, Lori Lee (Ehat) and Peri Ann (Hammons).

Mom was best known for her contagious laughter and always having a joke or two tucked away in her purse. She never knew a stranger and most often than not, would make a friend out of the stranger, no matter where she would go.

Mom and Dad's door was a revolving door, filled with friends and neighbors, either playing games and cards during the summer evening hours, or in later years becoming a bed and breakfast for many friends and family traveling through town. Often you would find the living room carpet rolled back and the stereo playing big band music with Mom and Dad dancing the waltz or swing.

Mom loved Utah and her desire to live in the "four seasons" finally overcame Dad's objections and desire to play golf year-round in the sunny skies of California. After Dad's retirement from the Los Angeles Fire Department, they packed up and moved into their home in Orem.

Mom had a great love of the Gospel of Jesus Christ and even at the young age of five would take herself to church and then at the age of eleven had herself baptized. She served faithfully in the Church all the days of her life, holding such callings as a primary teacher, Stake Primary Counselor, Young Women's President, Counselor and Adviser. She served in many callings within the Relief Society organization, such as a Visiting Teacher, Relief Society Teacher, President and Stake Relief Society Counselor. She loved most of all her time serving as a Missionary along with her sweetheart in the Rochester, NY Mission where they spent a majority of their time at the Church History Sites. Mom and Dad also served an 18-month mission as Temple Workers in the Toronto, Canada Temple. They also served as tour guides at the Provo Tabernacle, and Mom worked for almost 14 years at the Timpanogas Temple and also as a volunteer at the Provo Missionary Training Center for an accumulation of 15 years.

We are blessed to have such a mother and are grateful for her love and generous spirit.

Due to the restrictions of COVID we are going to have a private family service on Saturday December 12, 2020 in the Aspen 8th Ward building. We will have a live stream of the service for those that would like to watch, Saturday, December 12, 2020 starting at 12:00 p.m. Just go to www.walkersanderson.com and click watch live webcast on the main page. For those that can't watch it live it will be on Bonnie's obituary page the next day. Condolences may be offered online at www.walkersanderson.com
Read Less

Receive notifications about information and event scheduling for Bonnie

We encourage you to share your most beloved memories of Bonnie here, so that the family and other loved ones can always see it. You can upload cherished photographs, or share your favorite stories, and can even comment on those shared by others.

Posted Dec 13, 2020 at 08:54pm
Dear Family,
I’m Joani Scadlock Elliott, daughter of Charles Scadlock, Bill’s first cousin. Bill was like a big brother or uncle to my dad, always keeping a loving eye on him and offering support. Together, he and Bonnie, were an incredibly loving presence throughout my dad’s life and in turn, they became a loving presence in mine. I grew up in Sandy, Utah and Bill and Bonnie were living in Orem by then, so I have fond memories of their visits. Later after I married and was living in Utah county, I’d love running into Bonnie when she was working in the Timpanogos Temple. Bonnie would wrap me up in a big hug and make me feel so loved and special.

My dad, Charles, is in the Pointe Meadows Care Center in Lehi right now, but wanted me to express his love for Bonnie and his sympathies to all of her children and family. “Make sure you tell them I’m still alive!” I believe those were his exact words. ;) We send our love and gratitude for Bonnie’s beautiful life and want you to know you are all in our thoughts and prayers as you mourn the loss of this wonderful woman.
Much Love,
Joani Scadlock Elliott
Provo, Utah

Posted Dec 09, 2020 at 08:11pm
There are not enough words to express my love for my aunt Bonnie! Many fond memories will eternally be treasures in my heart. Janet, Jim, Lori and Peri...you have brought joy to my early years, and how grateful I feel to have you as cherished cousins. We adore you all, and are certain your precious mother is "waltzing" with sweet uncle Bill! I love you!
Comment Share
Share via:
MP

Posted Nov 29, 2020 at 05:56pm
I am grateful for having known and loved Bonnie. She was always a bright spot in our lives. I admired her for the faithful woman she was and for her caring, loving heart. She certainly left her family a wonderful legacy. But I am so happy for her reunion with Bill. Love to all, Mary Kay Peirce
Comment Share
Share via:

Posted Nov 24, 2020 at 01:21pm
All of us at Treeo are so sorry to hear of Bonnie's passing-she was such a sweet lady and always had a smile for us. Bonnie used to speak of wanting to be reunited with her husband but we would tell her we were selfish and wanted to keep her around a little longer. Our love and sympathy to her family.
Comment Share
Share via: 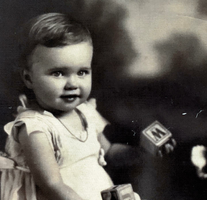 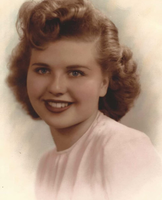