To share your memory on the wall of Cartio Barlow, sign in using one of the following options:

Print
Our beloved son and brother Cartio passed away in his sleep, November 10, 2020; at his home with Topham's Tiny Tots Care Center.

Cartio is an identical triplet, the youngest of the 3 boys. He was born on May 29, 2003 at the Good Samarita... Read More
Our beloved son and brother Cartio passed away in his sleep, November 10, 2020; at his home with Topham's Tiny Tots Care Center.

Cartio is an identical triplet, the youngest of the 3 boys. He was born on May 29, 2003 at the Good Samaritan's Hospital in Phoenix, AZ. Then transferred to Phoenix Children’s NICU. He was born at 29 weeks, weighing just 2lbs 1oz, and 14.5 in long. Being one of 3 boys, the names were at birth “A”, “B”, & “C”. Later his name was chosen by his 90-year-old Great Uncle Fred. "These are my Angel names for my Angel boys; Amnito, Bonito and Cartio."

Cartio grew up in Southern Utah most of his life, he is the 7th of 10 children. He was greatly loved and cared for by his family and many medical experts. Cartio was diagnosed at birth with “X-linked Hydrocephalus, Failure to thrive, and later Retinopathy of Prematurity.” In his short life he experienced more than 20 surgeries and numerous hospitalizations, always showing immense strength and endurance for any challenge in his way.

With the diagnosis of Retinopathy of Prematurity, both eye lenses had to be removed. Although he couldn’t see the beauty of this world; he created his own beauty and touched the hearts of everyone he met. Cartio loved horseback riding, long walks, car rides, Christmas light shows, story time, and attending school.

It is rare to find a stronger bond than the unbreakable and beautiful connection he had with his brothers. Cartio is preceded in death by his brothers: Linus and Bonito. He is survived by his Parents: Lawrence Sr., Markay, Stepmom: Jenn, Sisters: Lu, Kesha, Velvet, Katie, Ida, Shyan, Brothers: Amnito Lawrence Jr, and Rowdy.

Cartio is so loved and will be greatly missed as he joins his angel brothers. This is not good-bye but see you later.

We will be holding a graveside service at 10:00 am on Friday, November 13th, at the Isaac Carling Memorial Park, in Colorado City, AZ.

Condolences may be offered to the family online at www.walkersanderson.com
Read Less

To plant a memorial tree in honor of Cartio Barlow, please visit our Heartfelt Sympathies Store.

Receive notifications about information and event scheduling for Cartio

We encourage you to share your most beloved memories of Cartio here, so that the family and other loved ones can always see it. You can upload cherished photographs, or share your favorite stories, and can even comment on those shared by others.

Plant a Tree in Memory of Cartio
Plant a tree 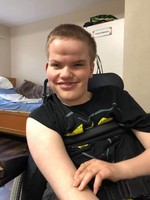