To share your memory on the wall of Charles Hardy, sign in using one of the following options:

He was born on July 27, 1950 in San Bernardino, CA to Kenneth & Beverly Hardy. He was raised in southern California with 2 broth... Read More
Charles Richard Hardy (“Rusty”) passed away unexpectedly on Feb 16, 2021, from a sudden heart attack.

He was born on July 27, 1950 in San Bernardino, CA to Kenneth & Beverly Hardy. He was raised in southern California with 2 brothers and 1 sister. He attended Colton High School in Colton, CA. And went on to Mt. San Antonio College in Walnut, CA where he studied Animal Science. He had a lifelong love of animals and spent many years raising ostrich’s, sheep, pigs, horses, mules, donkeys, chickens, and much more.

He met the love of his life, Sandie Jones, in the 5th grade. They went on to marry in the Los Angeles LDS Temple in June of 1969 at the age of 18. He was the father of 7 wonderful children, grandfather of 22, and great-grandfather of 3.

When Rusty was first starting his family, he worked at the BYU Dairy as a herdsman. He then started his own business in Orem, Empire Meat Company, where he did custom beef cuts and sales. Rusty also worked with his Brother, David, in construction building custom homes in North Orem. Rusty and Sandie have lived there for 44 years as they’ve raised their family.
Rusty had an entrepreneurial spirit. Wanting to build a business with his son’s, he started Hardy’s Countertops creating beautiful Granite & Quartz countertops for the last 35 years. In 2012, after raising his own bees and harvesting honey, he started Hardy Bee Company making all-natural personal care and cleaning products, aside from selling the raw honey.

Family was the most important thing to Rusty. His love for his wife, children, parents, siblings, and extended family was endless. Many have been blessed by his countless acts of service, encouraging words, and teasing ways. Rusty had a strong testimony. His thoughts were never far from his Heavenly Father. His faith in Jesus and eternal families gives us all hope that we can be together forever.

Funeral services will be Tuesday, February 23, 2021. The viewing will be held at Walker Sanderson Mortuary from 10:00-11:30 a.m., (646 East 800 North, Orem UT 84097), which will be followed by a funeral service & burial at the Payson City Cemetery at 1:00 p.m. Everyone is welcome, friends and family. Condolences may be offered to the family online at www.walkersanderson.com.

In lieu of flowers, we are accepting donations to this Venmo address: @kristy-hardyjohnsson
Read Less

Receive notifications about information and event scheduling for Charles

We encourage you to share your most beloved memories of Charles here, so that the family and other loved ones can always see it. You can upload cherished photographs, or share your favorite stories, and can even comment on those shared by others.

Posted Feb 23, 2021 at 10:09am
Life long family friend! I’ve been friends with Kim since we were kids! It’s been awhile since I’ve see Rusty, however I will always remember him teasing me about Tanya Tucker. I loved her as a kid, and he knew I loved her,as well as teasing me because I was so shy! Sending all my love and prayers to the Hardy family!❤️❤️❤️
Comment Share
Share via:
J

Posted Feb 23, 2021 at 01:11am
I remember your dad. He was indeed a gentle and sweet cowboy... a great scoutmaster to boot! I have fond memories of heading out to scouting events in the back of his pick-up truck (with the carpet kit no less, a rare thing in 1982) What a great family. Everyone was jealous of that handsome bunch. Good genes from Rusty & Sandie.

Please remember that the pain you feel today will eventually wash away, and the happy memories will shine through.

Posted Feb 22, 2021 at 11:26am
I have loved working with the Hardy family over the years. A testament of the quality of the parents is those amazing kids. Chuck raised some real fine kids. You are going to be missed my friend.
Comment Share
Share via:
GH

Posted Feb 18, 2021 at 02:13pm
Rusty was the funniest, sweetest brother in law I could have asked for! He loved his family to no end, especially Sandie and would do anything he could to help them! He was always so proud of his grandchildren and supported in anything they did...from rodeos to dance recitals! He was the biggest tease but he would always let me “hug” him even if he didn’t want hugs :) As hard as it is to let him leave and be without him, I know he’s happy being with his Son Jeremy who he missed so much, as well as his parents and his big brother David who loved him! I’m sure he now loves “hugs” because I KNOW he’s getting a lot of them now!!! Love you Rusty!
Comment Share
Share via: 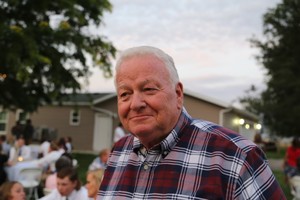