To share your memory on the wall of Clark Christensen, sign in using one of the following options:

Clark was born in Spanish Fork, Utah, on June 17, 1943, to Howard James Christensen and Edna Gardner. He was raised in Salem, Utah, surrounded by a large extended family. He spent many summers helping his uncle and cousins with farm work. He enjoyed helping in the family garden and fishing with his dad. During his late-teens, he spent three summers working as a carpenter. Clark excelled in school, graduating from Spanish Fork High School after just two years, which allowed him to attend BYU for two years prior to his mission call at age 19.

During his senior year at BYU, Clark met Vicki Marie Enders of Pocatello, Idaho, and they were married on September 5, 1967, in the Salt Lake City Temple. Immediately after marriage they moved to Burbank, California, where they lived while Clark did graduate work at the California Institute of Technology (Caltech) as a National Science Foundation Fellow. He received his Ph.D. in astronomy in 1972 and subsequently accepted an assistant professorship at BYU. He remained at BYU for a successful teaching career that spanned more than four decades, retiring in 2016.

Clark and Vicki had a large family of eight children during their marriage. After their divorce in 1991, both continued actively parenting their children. In 1994, Clark met Kathleen Child of Eagle River, Alaska, after she moved to Provo to continue her education at BYU. They were married October 31, 2000, in the Manti Temple. Their marriage added two stepchildren to Clark’s family.

In addition to his responsibilities at the university, Clark filled his time raising his family, serving in the Church, growing fruit trees and a large vegetable garden, and, in later years, spending time with his grandchildren. He was a wonderful father who taught his children the value of hard work and the importance of respecting and serving others, mainly by his example. He also shared his love of the outdoors with his children, taking them on numerous hikes and outings. Together they summited many mountains, explored national parks, skied, and slept out under the stars. His children always enjoyed going on these outings with him, as he seemed to have an endless store of knowledge of the natural world. Not only were the surroundings beautiful, and the activities challenging, but the conversation was always fascinating as well. These trips and the knowledge he always shared will be greatly missed.

A private service will be held 12:00 p.m. on February 10, in Provo, UT. It will be live-streamed at: https://www.walkersanderson.com. Burial will be in the Salem City Cemetery in Salem, Utah. In lieu of flowers, donations can be made to: https://www.cpms.byu.edu/giving.

Receive notifications about information and event scheduling for Clark

We encourage you to share your most beloved memories of Clark here, so that the family and other loved ones can always see it. You can upload cherished photographs, or share your favorite stories, and can even comment on those shared by others.

Posted Feb 11, 2021 at 10:53am
I knew Clark growing up in Salem, Utah. We were the same age, and so went through 9th grade together. He was always a gentleman, but had 2 left feet when it came to dancing. He was the "smartest person in school" by far. He worked in college books in the classroom on his own while the rest of us did regular studies with the teachers. He was a nice boy, always polite. He didn't talk a lot. He was studious and serious. I always knew he'd do something great! His great-grandfather was Soren Christensen, brother to my great-grandfather, Frands Christensen. These 2 men migrated from Denmark when they joined the Church of Jesus Christ of Latter Day Saints. If I have this geneology wrong, I apologize. I'm sure Clark lived a wonderful life and I admired him. Sherel Christensen.

Posted Feb 10, 2021 at 04:08pm
Dear Christensen family,
I know you don't need me to tell you what a great man Clark Sr. was. He was a major figure in my growing up in Provo and I hold him in deep respect and admiration. I appreciated his quiet leadership as scoutmaster, his lessons about the outdoors and the night sky, and his sense of humor. Reading Steve's note below about the shoes out the back window.... Wow- that brings back memories. I'm pretty sure we lost a few due to insufficiently strong knots. And the King's Peak backpacking trip was unforgettable. I remember Brother Christensen planning for "mountain greens" as part of our menu plan, but I don't remember that we ever ended up eating them. I do remember the fresh trout we would have for dinners though, always planning to camp by a lake (except for that cold night on the saddle beneath the summit). I think several of the peaks I've summited in Utah were first summited with him and Clark Jr., Lone Peak and Nebo particularly, but there were more. I will always be grateful for him including me on the Grand Teton trip. I'm just sorry I missed the Cascade Mountain trip, that sounds spectacular. He was a good man, a kind man, and a real adventurer. My deepest condolences to you all.
Comment Share
Share via:
ST

Posted Feb 10, 2021 at 03:33pm
My condolences to the Christensen family. It feels like more than a lifetime ago that Clark Sr. was my scoutmaster, teaching us about the world and ensuring we were in awe of the things around us. Some distinct memories of Clark Sr (we actually just called him Christensen, no Brother, mister or Clark, to differentiate him from Burr and Wendleboe, our two other fearless leaders). He showed up to all the campouts but at times I think he was totally oblivious to the trouble we were getting into. On our trips to southern Utah, we loved 'surfing' our shoes outside the back window of the brown station wagon. This entailed tying a long string (40-50 feet) to our shoe and seeing how well we could keep it upright while travelling 60 mph down the highway. Either he didn't know we did it, or loved it just as much.

I'll never forget the King's Peak backpack trip. It was two dads, their sons and me. I remember him carrying his son's backpack up one of the passes, then later in the trip stumbling over roots and rocks as his blood sugar was so low - scared me to death to see him fall down like that in the middle of the high Uintas. But he is a very tough man and I admire him.

I remember we had dinner at the Lion House for a youth conference. There was a ball of butter on the table. He sat down next to my friends for dinner and we tricked him into eating it by saying it was sorbet - his facial expression did not change at all as him ate it, and slowly put down his spoon knowing we tricked him.

The trips up West Mountain were awesome. To see planets and stars like that is mind blowing and life changing.

He was the quiet scoutmaster but there are more ways to teach than to open your mouth. He was a master at that. So many memories are flooding back and I write this. A time gone by but never forgotten. He represents so many good things about life. I know he is in a wonderful place reunited with his mother and father and his Father in heaven. Steve Thygerson
Comment Share
Share via:
WB

Posted Feb 10, 2021 at 11:55am
Dear Kathleen and family - We loved Clark and will miss him. And we love each of you too. Clark helped us prune our fruit trees. And Clark and I spent many days (and night) on the trail with the Scouts, including through the Grand Canyon. We remember with fondness his astronomy shows on the Father and Sons outings having the scouts out to the West Mountain Observatory. We loved his presentations about the Christmas Star. Clark has left a lasting mark on many people and youth, including the thousands who had him as a Professor at BYU. But we remember fondly each of you children: Maren from Young Women Camp Shilom, Deadra and Melissa with their beautiful violin numbers, Clark Jr. as a student working with us on the Sesquicentennial Celebration at BYU, Nathan - the best Assistant Scoutmaster ever, Jonathan (little Jon) a quick and competitive soccer player, bright and thoughtful Lisa as her Bishop and sweet Julie teaching us a love and reverence for music. We even like the same kind of (English Tudor) houses. Thank you for your friendship through the years and in the years to come. We love each one of you and our prayers will continue with you in the days and weeks to come. We know that families are eternal and that all sorrows and pains from this life will be healed in the life to come as we look to our Savior. Through Him and in Him the very best is yet to come. Love from The Barrett's
Comment Share
Share via:
AT

Posted Feb 09, 2021 at 09:59pm
Dear Christensen Family,
We were saddened to learn of Clark's passing and express our condolences to his family. We've been neighbors for well over 40 years. He was a good neighbor and was always happy to greet you. We were in several different audiences (eg, scouts, Sunday School, priesthood) on occasions when he taught. He had insights and an innovative way of presenting information. His astronomy presentations around Christmas time were memorable. A memorable event was Alton and several of his children being invited to hike to the top of Mt Timpangoes with Clark and several of his children.
Comment Share
Share via: 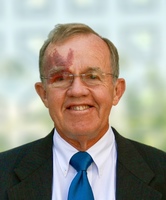