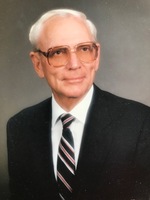 Clark L. Cox, beloved husband, brother, father, grandfather, and great-grandfather passed away on May 1, 2022. He was born on September 20, 1927, in Las Vegas, Nevada, the son of David Marriner Cox and Veda Belle Leavitt Cox. Clark attended schools in Moapa, Las Vegas and Bunkerville, Nevada, graduating in the Class of 1945 from Virgin Valley High School, Bunkerville, Nevada. After graduation from high school, he served in the Army and Air Force, reaching the rank of sergeant. He served in the weather service at the Air University, Tyndall Air Force Base, Panama City, Florida. He received his BA from Occidental College, his Master of Arts from Sacramento State University, and his Doctorate degree in Education Administration from the University of Southern California.

Clark’s entire professional life was spent in the field of education, serving as an elementary and junior high school teacher, principal, assistant superintendent, and superintendent in the states of Nevada, California, and Utah for a total of 37 years. He served four years as a teacher and 33 years in school administration. He retired from his chosen profession while serving as the Alpine School District Superintendent on June 30, 1988.

Clark married Irene Leavitt on June 19, 1946, in Las Vegas, Nevada. They had three children. He married Betty Buchanan Yeakel September 15, 1961, and was sealed to her in the Los Angeles LDS Temple. They had one child. Betty passed away on June 6, 1985. Clark married Janet Johnson Cole on October 10, 1987, and was sealed to her in the San Diego Temple.
After retiring from the Alpine School District, he and his wife, Janet, traveled extensively throughout the world for a period of eighteen months. In January of 1990, Clark and Janet were called on an 18-month proselyting mission to Zimbabwe and Zambia, Africa. This mission was the most rewarding and spiritually satisfying experience of his life. In fact, it was so satisfying that he and his wife served two humanitarian missions, one in Zimbabwe and Zambia for 18 months in 1997-98 and one in Turkey in 2000-2001. In between they served a twelve-month mission at the Visitors Center in Washington, D.C. in 1994-1995. They also served two Church Service missions in the Welfare Service Department of the Church in Salt Lake City and one that helped originate the Salt Lake Airport/Temple Square courtesy van program. Throughout his life, Clark loved his membership in the Church of Jesus Christ of Latter-day Saints and served in church positions including scoutmaster, teacher of various age groups, the Gospel Doctrine class, Elders Quorum president, bishopric counselor, and stake high councilman. He also served as a worker in the Family History Library and the Mt. Timpanogos Temple.

Throughout his life Clark enjoyed the outdoors. He loved traveling by horse, car, airplane, and anything else that moved. He enjoyed skiing, boating, camping, trailering, hunting and most sports.

Two of his greatest loves were the challenges of life and life itself. Clark was always grateful for his good health and being active in all phases of this life until the very end.
Clark, in his “spare time,” after retiring, wrote and had bound his life history as well as his spiritual history. Also, after years of research, he wrote life histories of twenty-five ancestors, beginning with those who had joined the Church as early as 1837. In addition, he wrote, typed, and bound each of his mission journals and his Zimbabwe Legacy. Each of the above were sent to his children and grandchildren who had reached the age of maturity.

Services will be held on Saturday, May 14, at the Cascade 4th Ward building, 1051 East 200 North in Orem at noon. There will be a viewing on Saturday from 10:30 am to 11:45 am. The service will be live streamed at www.walkersanderson.com; click on live webcast. Burial with military honors will follow in the Orem City Cemetery.