To share your memory on the wall of Clifton Laney, sign in using one of the following options:

Clifton Norman Laney, age 95 years of age, passed away peacefully on the morning of Tuesday May 4, 2021 at his home in Orem Utah. Clifton Norman Laney was born on September 17, 1925 in Park City, Utah, the fifth child and first son of Clifton Isaac Laney and Holly Fern (Warr) Laney. Clif, or Bud as he was called in his younger years, grew up on a dairy farm in Kamas, Utah. He started milking cows at five years of age and also started breaking horses as a teenager. He had a very beautiful horse named Comet, a pure Arabian stallion that he broke and then sold. It became famous in movie westerns as a horse ridden by the famous cowboy actor, “Tom Mix”.

In 1941, Clif moved with his family to Emmett, Idaho, where he finished High School in 1943. In 1944 he enlisted in the U.S. Army and served for two years. Clif loved serving his country and was an expert marksman. He was discharged from the U.S. Army in the fall of 1946 and returned home to Emmett, Idaho to help his father run the dairy farm, with Jersey, Guernsey and Holstein cows

Clif was only home for a short while before enrolling at Utah State University in Logan, Utah, where he studied Dairy Husbandry. He was the assistant herdsman and also became expert at making cheese and ice cream, where he developed some new flavors. He graduated in 1950, with a Bachelor’s Degree in Dairy Husbandry.

Clif was a wrestler at Utah State in the 190 pound weight class for two years. He was very successful and in fact was heavily recruited to be a professional wrestler, but declined to do fake wrestling. He also participated on the Debate team and there he met the love of his life, Ilene Bickmore. They were engaged on November 11, 1947 and were married on June 1, 1948 in the Logan, Utah LDS Temple.

After graduation, Clif and Ilene went to run a church farm in Ontario, Oregon. It was there that their first son David was born on September 27, 1950. After a time the family moved to Boise, Idaho to farm with his father, Clifton Isaac Laney on Cole Road.

In the fall of 1952, Clif decided to go back to Utah State in Logan, Utah, where he completed his teaching credential in the spring of 1953. On April 17, 1953 their second son, Blaine, was born in Logan Utah. In the fall the family moved to Blackfoot, Idaho, where Clif had his first teaching job at Firth High School nearby.

In 1956, Clif decided to find a larger school with more opportunity. He quit his job in Firth and went back to USU to take summer classes towards his Master’s degree. Here he met Dr. Wampler, who was the Superintendent of the Bellflower Unified School District in Bellflower, California. Clif was offered a job teaching English at Bellflower High School where he taught from 1956 to 1986, and also taught night school for 20 years. After moving to California, their third son Lance was born in May 1957, and on August 16th, 1962, their only daughter Nan was born.

While at Bellflower High School, Clif coached wrestling and was head of the English Department for many years, as well as coaching the Chess team. He taught ESL classes to groups of students that spoke over 30 languages. He also taught the Bible as Literature for five years. He always was there an hour before school and an hour or more after school to meet with any students that needed extra help. In his 33 years of full-time teaching Clif taught over 20,000 students and in some families taught three generations of the same family. He continued to work for the school district for another five years as a truant officer, substitute teacher and a key member of the curriculum committee. He finally retired in 1991, sold his home in Bellflower, CA and moved to Orem, Utah, where he has lived for the last 30 years.

Clif always wanted to be active and involved and was a leader in the Name Extraction program at the LDS Church’s Family History Center. He also did volunteer tax preparation at the Orem Senior Citizen Center. He actively sought opportunities to help his neighbors and also and had a wonderful yard and garden with apple trees, berry bushes, tomatoes, squash and many other delicious things.

Clif has always been active in the LDS Church and served in Scouting, as Elders Quorum President, Stake Missionary, Ward Mission Leader, and Stake Mission President. He was a very active missionary and taught many people the gospel as a Stake Missionary and Seventy. His home was a center for gospel teaching. He also served in two bishoprics and on the High Council. He served as a Temple Worker in the Provo Temple and the Mt. Timpanogas Temple. Clif always worked hard, loved to serve and help people, and had a magic smile. Clif loved his family, he loved his neighbors and he loved his God and his Lord and Savior Jesus Christ.

Clif is survived by his wife of almost 73 years, Ilene Bickmore; his sons David (Gillene) and Blaine (Dorothy), his daughter Nan (Frank) Lewis, and one sister, Margaret Feik, of Nyssa, Oregon; seven grandchildren, and nine great grandchildren. He was pre-deceased by his youngest son, Lance Laney.

A viewing will be held on Monday, May 10th, at 10:00 AM, at the Canyon View 5th Ward building, 1090 North 400 East, Orem, Utah 84057. Funeral services will immediately follow at 11:00 AM. Burial will be at the Paradise Cemetery in Paradise, Utah. Funeral services will be live streamed at www.walkersanderson.com where condolences and memories may be shared with the family.
Read Less

Receive notifications about information and event scheduling for Clifton

We encourage you to share your most beloved memories of Clifton here, so that the family and other loved ones can always see it. You can upload cherished photographs, or share your favorite stories, and can even comment on those shared by others. 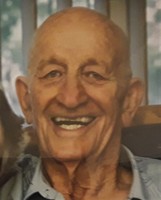