To share your memory on the wall of Colleen Anderson, sign in using one of the following options:

Colleen was born on October 1, 1931 in Orem, Utah to Ned and Utahna Kofford. She was the oldest of three children.
Colleen Rae Kofford Anderson, 88, passed away on Saturday, August 22, 2020 at her daughter’s home in Highland, Utah.

Colleen was born on October 1, 1931 in Orem, Utah to Ned and Utahna Kofford. She was the oldest of three children.

On April 21, 1950 she married the love of her life, William R Anderson at her parent’s home in Orem. Six months later they were sealed in the Manti Utah Temple.

Colleen was a faithful member of the Church of Jesus Christ of Latter-day Saints. She sought to pattern her life after the Savior, and was compassionate, caring, selfless in her service to her family, neighbors, and friends. Although she had many callings in the Church the ones she cherished the most were serving with her husband at the Missionary Training Center and as missionaries in the Portland Oregon Mission and the Conference Center in Salt Lake City.

Colleen was one in a million. She was loved by all who knew her. Her greatest joy was being a wife, mother and grandmother. She was a devoted homemaker, always welcoming anyone in need into her home.

She is preceded in death by her sweetheart Bill, her two sons, Mitchell and Michael, her sister Carol Carter, and grandson Kyle Anderson.
Read Less

To plant a memorial tree in honor of Colleen Anderson, please visit our Heartfelt Sympathies Store.

Receive notifications about information and event scheduling for Colleen

We encourage you to share your most beloved memories of Colleen here, so that the family and other loved ones can always see it. You can upload cherished photographs, or share your favorite stories, and can even comment on those shared by others.

Posted Aug 27, 2020 at 11:15pm
Dear Family, Colleen was a great neighbor for several years, and a special friend to me. I am thankful that she has been released and that she can go home to be with Bill. - Carolyn Crabb
Comment Share
Share via:
LO

Posted Aug 26, 2020 at 10:18pm
Colleen and Bill were such important and wonderful members of our Evergreen East Community!!! I loved them both and missed them when they left our neighborhood. What beautiful people they were and I look forward to meeting them again in the hereafter! Love and Prayers to all of you! Linda and Peter Van Orman
Comment Share
Share via:
SB

Posted Aug 25, 2020 at 11:48pm
Colleen was a dear friend of my mother, JoAnn Stratton. Their friendship began early, from their cheerleading days at Lincoln High School and through the years. Lifetime buddies who always stayed in touch. My thoughts and prayers are with your family.
Kind regards,
Sue Stratton Bias
Comment Share
Share via:
JM

Posted Aug 25, 2020 at 07:40pm
I am so sad to hear this about your Mother. Your Mom and Dad were our neighbors for a few years and your Dad came to our home in the middle of the night to give one of my sons a blessing with my husband. My husband is now renewing their friendship as he died in 2006. The blessing was a very powerful blessing. I have never felt anything like it since in my life. My son was about 9 months old and very sick with a high fever. As the pronounced blessing was nearing the end I felt the power of God go through my Sons little body and through my body. It was an amazing power and I knew how much my Son was supposed to be here on Earth. Thank you for having such amazing parents. I will never forget them. Jeriann Hughes Marks
Comment Share
Share via: 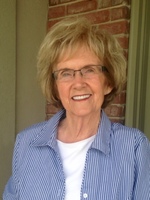