To share your memory on the wall of Dannie Carter, sign in using one of the following options:

Dannie Wallis Carter completed his life’s mission surrounded by those he loved on May 29th 2021, leaving behind his wife of 62 years.

Dannie Wallis Carter completed his life’s mission surrounded by those he loved on May 29th 2021, leaving behind his wife of 62 years.

Dannie was born to Emily Thomas and Francis Dominicus Carter, on a warm summer day on August 16th 1938. Dannie was born the second child of four. Emily Carter (sister) Ronald Francis Carter (brother) and Lennis Smith (sister). He grew up in the small city of Orem Utah at the base of the Cascade Mountain. As Dannie grew, he was thinking about joining the Air Force when the love of his life swept him off his feet. Dannie later Married Kathryn Price on September 19th, 1959 in Lehi Utah. Dannie and Kathryn were later sealed in the Salt Lake Temple on September 19th 1963.

Dannie and Kathryn made a great life for themselves. They were the proud parents of seven children. Ronald Dan Carter, Mary Charis Johnson, Robert Todd Carter, Heidi Carter, Rodney Price Carter, Ryan Thomas Carter and Reese Jacob Carter. Dannie was an amazing father and provider. Dannie gained his Journeyman papers as a machinist and was employed Eimco Corp. in Salt Lake City 15 years. Dannie wanted to be closer to his wife and children and ended up moving to Geneva Steel Corp in Orem, and was employed there till it closed in in 2000.

Dannie’s wife Kathryn, children (7), grand children (24) and great grand children (37) would like Dannie to be remembered as the father, grandfather and great grandfather who never missed a game, recital, or baptism. He showed up to support his family always. He was a hard worker and expected the same from his family. He was firm yet kind in his teachings and if he could, he taught through example; allowing you to figure it for yourself because, “if you give a hungry man a fish, you feed him for a day, but if you teach him how to fish, you feed him for a lifetime.” Dannie would reach his hand out to those in need, and was called “grandpa” to many people not of his blood.

Dannie loved to travel. Dannie and his wife Kathryn spent 4 months living in the Alaskan wilderness in their trailer. He exercised an extraordinary example of what true love is by loving his wife Kathryn. Always putting her first, with a kiss and hug to follow. Dannie put God above all and had a close and personal relationship with his father in heaven. Dannie leaves behind a legacy of people who love and will cherish his teachings always. His family and friends are forever grateful for the man they had the privilege to know and love.

A Lunch in will be provided for close friends and family at an LDS Church to be announced.

We encourage you to share a picture or personal story of Dannie on familysearch.org when available or share condolences and memories on www.walkersanderson.com.

We would like to have these memories for his family and loved ones to look back on, and to share with his future prosperity.
Read Less

Receive notifications about information and event scheduling for Dannie

We encourage you to share your most beloved memories of Dannie here, so that the family and other loved ones can always see it. You can upload cherished photographs, or share your favorite stories, and can even comment on those shared by others.

Posted Jun 03, 2021 at 05:29pm
To the Carter family,
Our thoughts and prayers are with you during this time. Reading the touching obituary for your Dad/Grandpa, it is clear how much he is loved and will be missed. Robbie and Teresa, you both have been a part of my happy memories growing up, and I will never forget the love and support you gave to my family. Remember the good times you shared with your Dad and Grandpa, and look forward to the day you will be together again. We send you our love, and wish your family peace and comfort.
Love,
Laynie, Christopher, and Elizabeth Nieto
Comment Share
Share via: 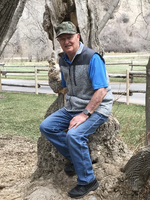 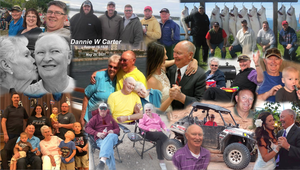