To share your memory on the wall of David Soren Anderson, sign in using one of the following options:

Print
A Webcast of the Graveside Service will be available on Wednesday, January 6th starting at 12:00 pm at www.walkersanderson.com

David Soren Anderson, age 70, of Orem, Utah passed away Saturday January 2, 2021.
Condolences and memori... Read More
A Webcast of the Graveside Service will be available on Wednesday, January 6th starting at 12:00 pm at www.walkersanderson.com

David Soren Anderson, age 70, of Orem, Utah passed away Saturday January 2, 2021.
Condolences and memories may be shared with the family online at www.walkersanderson.com
Read Less

Receive notifications about information and event scheduling for David Soren

We encourage you to share your most beloved memories of David Soren here, so that the family and other loved ones can always see it. You can upload cherished photographs, or share your favorite stories, and can even comment on those shared by others.

Posted Jan 08, 2021 at 03:18pm
I remember David as a great man. A man of patience and kindness. Growing up with his son Phill, we would be at the home very often and spent many hours hanging out. David was always generous and giving.
I remember how proud he was of Phill when he received his mission call to California. Phill was the first of our group to go on a mission and first to receive a call. David couldn't of been more happy that day as Phill opened his calling.
Comment Share
Share via:
LH

Posted Jan 07, 2021 at 11:52am
In August of 2017 I gave a spotlight on Soren in our ward choir. Vera was so sweet to give me great memories of him. He was modest in his ability to sing but was willing to participate as a kindness to us and Steve Everett, our ward choir director.

Soren was born in Salt Lake City, Utah. He was baptized in Cardston, Canada. His father built smokestacks, their family traveled all over the USA and Canada. He attended 23 schools, some for only three months to two years. He went to high school with Ann Murray, a famous recording artist in the 70’s. He called her to ask her on a date, she responded, but he hung up the phone after her answer, he never heard her response as he was so nervous.

He earned his bachelor’s in education in Mathematics in Oglethorpe University in Atlanta, Georgia. He taught high school mathematics, and coached basketball. Soren wanted to meet President Ford at Oglethorpe University, but he did not have his driver’s license with him and they let him in with a boy scout card as he was a scout leader in the ward.

Soren started managing a plumbing company in Atlanta, Georgia. In Utah from 1997-98 he managed Mr. Rooter. Even after he retired, he took a job to deliver auto parts. His favorite movie is “Hoosiers.” He was friends with the producer of “Glory Road,” and he is a big Jazz fan.

If he could choose his favorite activity, he would love to fish on the Utah Lake. He had a great summer fishing in Canada on Lake Louise. This year he vacationed in Cardston, Canada August 18th in the Banff National Park.

He was a High Priest group instructor in 2017, later a scout activity leader, and served as a 3rd Ward clerk until his passing. His favorite treat was apple or blueberry crisp with sugar free stevia. I made a large sugar free apple crisp for him that day.

When I had my hip surgery, he made an incredibly good dinner for us. Vera was ill at that time and she wanted him to make sure he told us he made that dinner as she was not sure of his cooking skills. He invited us over after Vera passed away and cooked salmon and a delicious meal. He made aebleskivers (a danish pancake shaped like a ball) and taught Cleve and I how to make them on another day.

He had an impactful spiritual experience finding Vera’s temple cards. She had worked years ago on her family history and the cards were in the basement in a random place. He was led to that very place to find them. Soren was determined to complete her temple cards and work on her family line to take them to have their temple work complete. I spent many days helping him on the computer. We would attend the temple together on Wednesdays and he would go often with his sister to the temple.

It was an honor to record his life story at the Riverton Family History Center. I enjoyed his humor and humble way he expressed his faith and love for his family. His stories are very inspiring. We digitally scanned his photos, and I was hopeful we would create his and Vera’s book someday. 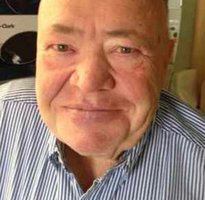