To share your memory on the wall of Dixie Smith, sign in using one of the following options:

Dixie Shirlene Gordon Smith,85, passed quickly on Saturday, August 15th, 2020, just a few hours after the funeral services for her last remaining sister. She just did not want to be left behind and miss the glorious family reunion with her entire family in heaven. Dixie was the last surviving sibling, so we are certain that our Dad, Jerry, picked her up in a long black Cadillac and rushed her to reunite with her Father, Mother, brother and sisters.

Dixie was born in Orem, Utah on April 20, 1935, to Curtis Gordon and Minnie Crandall Gordon. She was the youngest of 8 children. Dixie met Jerry Tucker Smith when his family moved from Salt Lake City to Orem to run a grocery store. Jerry’s mother became Dixie’s Young Women’s leader and set them up. Jerry and Dixie were sealed in the Salt Lake City Temple on June 12, 1953. They were married just shy of 65 years before Dad passed to prepare their mansion in heaven. Their commitment to temple covenants and eternal family is what they cherished the most. Dixie loved her family more than anything and made sure every child, grandchild and great-grandchild received a card with money on their birthday, anniversary, holidays, and any other occasion she could find to make them feel special.

Besides her family, a few of Dixie’s hobbies were cooking and ministering to others, especially those with special needs. She worked at Union Elementary School as a secretary until she married Jerry. They moved our family to Arvada, Colorado when Jerry took a job with the Bell and Dunkel food brokerage firm. Dixie also worked for Bell and Dunkel, keeping their books. Dixie also worked for Village Inn Corporation after the kids were grown.

While in Arvada, Dixie and Jerry made many lasting friendships that our family will always cherish. Dixie, like Jerry, was a faithful member of the Church of Jesus Christ of Latter-day Saints. She served in a variety of service callings throughout the years, some of which included relief society president, primary president, stake young women’s president and over 17 years of girls camp. Throughout the years, Jerry and Dixie also opened their home to care for others estranged from their parents, for foreign exchange students, and for unwed mothers. Dixie and Jerry also served in both the Denver and Timpanogos Temples for many years. They taught us by their example to be committed to the gospel of Jesus Christ, to serve others, to be honest, loyal and to work hard.

When Jerry retired, they moved back to Orem, Utah where they could be closer to their family and take care of aging parents. Dixie, once again began serving by making brownies, cookies, peanut butter bars, jams and dried fruit, and taking it to whatever neighbor, friend or soccer team needed it that day. Hence, the name, Grandma Sweetheart. In her last week of life, she was still teaching her great granddaughter how to make brownies.

Dixie was a sweetheart! She loved all of God’s children. Our family hopes to continue her “sweet heart” legacy for many years to come. We would like to send our love and appreciation to our friends and neighbors that have kept in contact over the years and made our parents feel so special. Especially, in the years when Dixie was alone, so many of you have watched over her, protected her and served her with love. We will be forever grateful for your kindness and Christlike service. May God bless you and your families.

Dixie is survived by her six adoring children and their spouses: Jerilee (John) Haggerty, Pamela (John) Barlow, DeeJay (Richelle) Smith, Daryl (Rebecca) Smith, David (Marianne) Smith, and Robyn (Mark) Bretzing; 25 grandchildren and 25 great grandchildren. We have been eternally blessed by her example of service and sacrifice for our family and others.

Funeral services will be held Friday, August 28, 2020, 11:00 a.m., Aspen 8th Ward, 1465 North 800 West, Orem. A viewing will be held Thursday, August 27, 2020, 6:00 - 8:00 p.m., Walker Sanderson Funeral Home, 646 East 800 North in Orem. Due to the coronavirus, the viewing will limit the number of people at a time and masks are required. The funeral will be limited to less than 99 people so contact Pamela Barlow, barlops@nv.ccsd.net to make a reservation. The funeral will be able to be viewed through the Walker Sanderson Funeral Home Website by clicking on Live Webcast. The Interment will be in Orem City Cemetery, 1520 North 800 East, Orem. Condolences may be offered to the family online at www.walkersanderson.com.
Read Less

Receive notifications about information and event scheduling for Dixie

We encourage you to share your most beloved memories of Dixie here, so that the family and other loved ones can always see it. You can upload cherished photographs, or share your favorite stories, and can even comment on those shared by others.

Posted Aug 23, 2020 at 11:21pm
Rayanne Brunski Melick sends her love to Dixie's family. I'm so glad that I was able to be part of your lives through Jerilee in Colorado and continue that here in Utah a little. Dixie was like a great big bear hug for me and I will always appreciate her love and kindness. I wish I could be at the funeral but I will be watching it from my son's house in Idaho. Pam and siblings, your parents were a great example to me. Seeing you guys as adults, you have done them proud!
Comment Share
Share via:
L

Posted Aug 23, 2020 at 12:15am
Ray and Lila Burgener Nielson & family send our love and Sympathy to Dixie's family. I lived in the same ward as Dixie and the Gordon family. I loved seeing Dixie and her father coming by with their Horse and buggy. She liked to play tricks on our father and family. I also lived in the same ward in Arvada, Colorado, and our children enjoyed knowing some of you children. She was a special lady and friend. Our sisters Brenda and Elaine Burgener send their love and sympathy.
Comment Share
Share via: 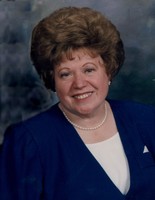