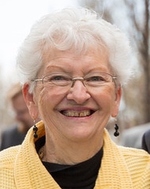 Donna Joan Miner Barnes (88) passed away peacefully at home on Monday, September 28, 2020, having been well and lovingly cared for by family members and Hospice. Donna and her twin brother, Donald Rowan Miner, were born March 21, 1932, to Earl Martin and Thelma Brown Miner at Suburban Hospital in Southgate, California, the fifth and sixth children of the Miner Family.

On April 15, 1950, Donna, age 18, and Richard Bennett Barnes, age 24, were married in the St. George Utah Temple of The Church of Jesus Christ of Latter-day Saints. The family lived in Whittier and La Puente, CA; Bedford, WY; and South Jordan, Orem, and St. George, UT; finally settling in Orem. While living in South Jordan, Donna worked as secretary to the Jordan River Temple president while the temple was being built and after it opened. Donna and Dick also served as a couple in the Washington Tacoma Mission where Donna was mission secretary. Throughout her life she served in many Church callings in the wards and stakes in which they lived, including ward Relief Society president and girls’ camp director.

A beloved daughter, wife, mother, grandmother, great grandmother, aunt, and friend, Donna found joy and purpose in bringing family together for celebrations and reunions, and finding opportunities to reunite lifelong friends. Her legacy of faith in the Lord Jesus Christ, family unity, and love of life will be remembered for generations.

Preceding Donna in death are her parents; her husband of 70 years, Richard Bennett Barnes; her brothers Thomas, Richard, and Donald Miner; her sisters Winifred McGuffin and Kathleen Anderson; and four, young, great grandchildren.

Private Graveside services will be held Monday, October 5, 2020, at the Orem City Cemetery. A live webcast will be offered at 11 am.