To share your memory on the wall of Dustin Johnson, sign in using one of the following options:

Ralph, Nancy, Eric, Ryan, Doug, Katie, and Brent collectively felt a tiny tinge of jealousy on Saturday, September 5, 2020, when their daughter/sister, Kimberly (who died in October 1990), became the first Johnson family member to hear Dustin David Johnson’s side of the story. Dustin (also known as Dust, Dustman, D, Double D, but never Dusty unless you are a super adorable niece) passed away peacefully in his sleep on Saturday at his apartment in Orem, Utah, after a lengthy period of declining health, he was 37 years old. Despite his disabilities and health struggles, Dustin was able to experience living in a place of his own thanks to Brady Schaefermeyer and his team at Launch. Dustin never met a stranger and nearly always had difficulty understanding concepts like personal space!

On behalf of Dustin, his family offers their apologies to any victims of his “bummy bites” (thanks Mom!), which were greatly curtailed though never completely eliminated after the aforementioned mom received a note from the Dan Peterson School in American Fork, Dustin’s alma mater, asking why Dustin periodically pinches people on their caboose. Following his formal education at Dan Peterson (and to be real even before it) where he double-majored in Baseball Card Sorting and Jigsaw Puzzle Mastering, Dustin pursued a career as a professional napper and soda thief. He was remarkably skilled in both his capacity to nap in virtually any body position and location (seriously Dust, upside down on the stairs, how could you possibly fall asleep in that position?) AND his ability to so silently slip behind you such that when you returned to your Coke it was completely emptied. Dustin hated being offered water, wearing a hat, walking barefoot on grass, and having anything draped around his neck; the medal ceremony after Dustin’s participation in the Special Olympics in the late 90s remains controversial.

Dustin loved unconditionally and never hesitated to show both his affection, he was a hugging savant, and his nearly ubiquitous carpenter crack to family, friend, and stranger alike. While he struggled with multiple disabilities, health struggles, nearly complete blindness later in life, and a consistent difficulty in keeping his drawers pulled all the way up; Dustin never failed to show affection. He loved his family and as every arthritic writer in the family knows he would never tire of passing Sacrament meeting by having his pew neighbor repeatedly write the names of every family member on the Sacrament meeting program; expressing little sympathy for cramping hands. Dustin could typically be found with an entourage consisting of his favorite blanket, a bag of baseball and basketball cards to sort, and a gaggle of assorted stuffed animals. He loved your dog as long as it was completely still and facing away from him.

Dustin’s hobbies included audibly grinding his teeth, wiping off kisses blown to him, poking the person sitting next to him, and the aforementioned bummy bites. He enjoyed going to Disneyland with his family where he “loved” getting to ride the same attraction twice in a row so that the entire family could skip the line! Following a short one-sided relationship with Reese Witherspoon, Dustin carried on a twenty-year love affair (also one sided) with Drew Barrymore and could almost always be found with a paper in hand, sporting a t-shirt, or resting his head on a pillow bearing her image. Dustin is survived by his mother and father, Ralph and Nancy Johnson of Orem; his siblings, Eric (Patricia) Johnson, Ryan (Crystal) Johnson, Doug (Cris) Johnson, Katie (Kirk) Golding, and Brent (Donna) Johnson; and 17 nieces and nephews Alec, Riley, Chase (Summer), Parker (Kendra), Haden (Minnie), Tanner (Cayla), Mady, Adison, Cooper, Mallory, Blake, Garret, Andrew, Mila, Brooklyn, Allie, and Cesia (sorry Dust, I am only writing their names once!). Dustin was predeceased by several aunts and uncles and his loving sister Kim.

Dustin’s family and friends will gather at 11 am on Friday, September 11, 2020, at the Orem City Cemetery to celebrate Dustin’s stubborn, loving, unembarrassable, and affectionate life (the service will be streamed live). We invite all to attend, to bring masks and observe social distancing. Please consider bringing chairs as well. A viewing will be held at the Walker Sanderson Funeral Home in Orem on Thursday, September 10, 2020, from 6 to 8 pm. While Dustin would assuredly prefer you to remember him by invading someone’s personal space, quietly “bummy biting” a neighbor (willing participants only please), or secretly sipping away three fourths of a friend’s soda; flowers can be sent to the Dustin Johnson Funeral c/o Walker Sanderson Funeral Home, 646 East 800 North, Orem, Utah 84097. Donations in lieu of flowers can be made to the Dan Peterson School at danpeterson.alpineschools.org/donate/.

Condolences and memories may be shared with the family at www.walkersanderson.com.
Read Less

To plant a memorial tree in honor of Dustin Johnson, please visit our Heartfelt Sympathies Store.

Receive notifications about information and event scheduling for Dustin

We encourage you to share your most beloved memories of Dustin here, so that the family and other loved ones can always see it. You can upload cherished photographs, or share your favorite stories, and can even comment on those shared by others.

Posted Sep 08, 2020 at 11:08pm
This is by far one of the happiest and most tender things I have ever read! I’m sure Kim was so excited to hug her brother tight! We love you guys thank you for sharing this sweet obituary! We love you guys and are sending our prayers your way ❤️
Stefnie Beck (Andrew)
Comment Share
Share via:
IR

Posted Sep 08, 2020 at 08:43pm
What a beautiful short vignette of Dustin's life--it brought both tears and smiles to me. I remember sitting with Dustin during Primary Sharing Time as Nancy conducted. He took my hand and we pointed to every name written on the Sacrament meeting program. He never tired of that (nor did I) as we went through the names over and over again until Sharing Time was over. He loved his family--Mom, Dad, brothers, sisters, nieces, and nephews and that exercise demonstrated it to me every time we did it. Bye, Dustin, and enjoy your reunion with Kim, you were one in a million!
Comment Share
Share via:
BJ

We loved to help Dustin do his baseball or other cards. He would sit for hours and do them at our family home evening group. He was a joy to see and love. He loved to give hugs and you knew they were genuine. We loved his tribute and will always be glad we were able to a part of his special life. He was truly a special young man. My first thought when we heard he had passed away was he wanted to be to the wedding. Then my thought turned to Kim and how much the two are loving being together and for Dustin who can now tell her how he feels. So grateful for his loving family who took such good care of him. Love, Barry and Vira Johnson 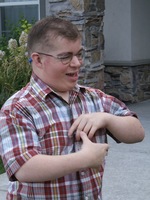