To share your memory on the wall of Elaine Harris, sign in using one of the following options:

Elaine Harris Obituary written by her on March 1, 2019
I was born September 27, 1931 to Jesse and Delila (DeSpain) Evans. Our family lived most of my growing up years in Arizona. When I was very young, our family spent my early years living in and near the mountains where dad worked building roads and locations, moving into Snowflake when it was time for school. When I was 12 we moved to a farm near Aztec, New Mexico. Being the oldest in the family, I learned to milk cows and drive tractor to help dad with some of the farm work. I learned to work hard, helping to bale and haul hay and working in our big garden and then helping to harvest and can fruit and vegetables. We raised much of what we had to eat. I went to high school in Aztec and was a majorette in the high school band.

In 1990 I married Everett Harris. During the 14 years that we were married, we traveled to several different countries and saw much of the United States as we visited our families and friends. Ev passed away in 2004 and in 2007, after living alone in Logan for 3 years, I decided to move to Provo where I found a condo that I thought would be just right for me. Even if it wasn’t in the best part of town, it was the only thing that I could find that had an attached garage and no stairs. It is in a Senior Community and everyone here is in their later years. I have had the best neighbors anyone could ask for. Some of them have moved or passed away but there have been some other move in and it is a very comfortable community with lots of friends.

Receive notifications about information and event scheduling for Elaine

We encourage you to share your most beloved memories of Elaine here, so that the family and other loved ones can always see it. You can upload cherished photographs, or share your favorite stories, and can even comment on those shared by others. 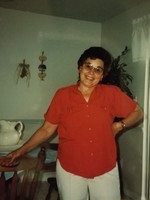