To share your memory on the wall of Els-Marie Johnson, sign in using one of the following options:

Els-Marie was born November 17, 1928 in Eskilstuna, Sweden approximately 70 miles west of Stockholm, Sweden. As a young girl, Els-Marie stood out in both academics and sports. She excelled at school in study of the Swedish language, was excellent in math, loved to read, and had a passion for history. She was blessed later in life to visit many of the places in Europe she discovered in books during her childhood. In her youth she was very athletic and played on basketball and track and field sports teams. Reading became her lifelong pastime.

Her youth was also marked by the dark times of World War II. Although Sweden maintained its declared policy of neutrality during the war in 1940 neighboring Denmark and Norway became occupied by German forces. The War had a profound impact on Els-Marie as she vividly recalled listening to the news of the war on the radio and experiencing shortages of food and fuel.

From an early age Els-Marie had a strong testimony of the Gospel of Jesus Christ and with her parents and family attended a very small branch congregation of the Church of Jesus Christ of Latter-day Saints. In 1944 she attended a Church youth conference in Jönköping where she made lifelong friends and met Clifford Johnson, who years later became her husband.

Els-Marie’s first job was in Eskilstuna where she worked in a women’s boutique as a milliner. In 1946, she moved to Stockholm to experience her first time living away from home. While in Stockholm she worked in a health food store and continued her education including courses to learn the English language. During the next two years she grew close to her Church family, members in the Stockholm Branch of the Church.

In the summer of 1948, she boarded the transatlantic ship, MS Gripsholm in Göteborg (Gothenburg), Sweden with four families from the Eskilstuna Branch and emerged in New York City. Eventually she made her way across North America by train to Salt Lake City, Utah, the place she would start a new life and home.

It was in Salt Lake City, where Els-Marie once again met the young man from her youth who had immigrated to the US from Sweden in 1947 after returning from his missionary and military service in Germany.

Clifford and Els-Marie were married in the Salt Lake Temple on January 11, 1949 and settled in Lindon, Utah. The couple was blessed with six children: Laila Parry (Joel) of Lindon, Utah; Kenneth (Debbie) of Atlanta, Georgia; Ronald (Jan) of Draper, Utah; Steven (Crystal) of Los Gatos, California; Yvonne Russell (Wilf) of Seattle, Washington; and Sonja, of Lindon, Utah. They have 16 grandchildren and 51 great grandchildren. Els-Marie is survived by her brother Nils Harry (Mildred) Gustafsson of Västerås, Sweden and her six children. She was preceded in death by her parents, Oskar Bernhard and Sigrid Kristina Nilsson Gustafsson, brother Olof “Olle” Bernhard Harris Gustafsson, her husband Clifford, and a great-grandson.

Els-Marie was ambitious and spent her time making a home and nurturing her children. She regularly expressed that her greatest joy and accomplishment in life was her six children. She saw the sacrifice of leaving her homeland as a young woman as a great benefit to her entire family for generations to come.

She was a trusted confidant loved by her children, grandchildren and great grandchildren who lovingly refer to her as Farmor, or grandmother in the Swedish language.

Church service played a key role in Els-Marie’s life. She served as a lifelong visiting teacher and served in many Church organizations in the Lindon Second Ward including in a Relief Society Presidency and later in life as a senior missionary with her companion husband where she served as Assistant to the Matron in the Stockholm Sweden Temple.

Els-Marie and her husband were longtime residents of Lindon, where she spent the majority of her adult life living on Harcliff Circle at the “top of Lindon Hill”. During the last three years she lived at the Covington Senior Living center in North Orem on the Lindon City line where she made friends among the residents and staff.

She will be deeply missed by family, friends and so many other people she touched during her full life; but no doubt is having a joyous reunion with those who have gone before.

Funeral services will be held socially distanced in person and by Live Webcast on Saturday, April 10, 2021 at 11AM at the Lindon 2nd Ward chapel of the Church of Jesus Christ of Latter-day Saints, 610 West 100 South, Lindon, Utah. For information on the Live Broadcast see www.walkersanderson.com.

A socially distanced viewing will be held on Friday evening, April 9, 2021 from 5PM to 7PM at the Walker Sanderson Funeral Home, 646 East 800 North, Orem, Utah and also Saturday from 9:30AM to 10:45AM at the Lindon 2nd Ward chapel prior to the funeral services. For more Information see https://www.walkersanderson.com.

The family requests that in consideration for the safety and respect of all who wish to attend that facial masks are worn and COVID guidelines followed. Due to severe allergic concerns, please avoid using scented perfumes and other products. Els-Marie loved flowers and low fragrance flowers are appreciated.

Interment by immediate family will be in the Lindon City Cemetery.
Read Less

Receive notifications about information and event scheduling for Els-Marie

We encourage you to share your most beloved memories of Els-Marie here, so that the family and other loved ones can always see it. You can upload cherished photographs, or share your favorite stories, and can even comment on those shared by others.

Posted Apr 18, 2021 at 05:35am
Els-Marie was a customer of mine at a clothing store I managed. When we first met she told me her name but said that people often couldn't remember it, and if I remember correctly, she said they would call her Marie. I always made sure to use her given name when she came in out of respect. She was a beautiful, sweet, and special lady. I adored her as a customer. She had a spirit about her and I could tell without ever being told that she had lived a life. Really lived. I wish I could have known her as a friend and been able to hear about her life and experiences. Hopefully her family can hold dear all the memories of what a sweet soul she was. God bless you all.
Comment Share
Share via:
MC

Posted Apr 09, 2021 at 04:41pm
My husband and I served in the Covington Branch. I had many wonderful visits with Els-Marie. We talked a lot about Sweden, as I had ancestors from there. I love Els-Marie! What a sweetheart!!
Marsha Christiansen
Comment Share
Share via:

Posted Apr 04, 2021 at 02:05pm
I serve in the Relief Society Presidency in the Covington Branch. I loved seeing Els-Marie on Sunday attending Sacrament meeting. Thank you for sharing more of her life. What a wonderful mother you had in your life. What a faithful sister as she attended Sacrament meeting Sunday morning, us not knowing that that would be the last time we would see her.

Posted Apr 02, 2021 at 09:48pm
What a special lady. I always loved visiting Elsa Marie at her home. I always felt so welcome and we loved to visit with each other. As a young mother she always shared such great information. I will forever cherish what I learned from her. I still use some of her favorite recipes ❤️❤️ When I moved Elsa Marie was one of the people I missed seeing the most. I truly loved this elect lady. My thoughts and prayers be with her family. Just always know she was a special lady and a great example to everyone that knew her. 🌺🌺
Love
Marilyn Patch Finlayson
Comment Share
Share via: 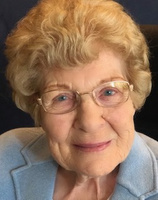