To share your memory on the wall of Eugene Ettinger, sign in using one of the following options:

He attended dental school in Santa Ana, California, and graduated from Orange Coast Junior College where he earned a degree in Dental Technology. Later, he moved his family to Orem, Utah, where they have lived since 1973.

Gene was the owner/operator of Ettinger Dental Lab and had an eye for detail and was meticulous in crafting dental products that reflected his high standards throughout his career. He loved sports and for many years had season tickets to BYU football games. He enjoyed skiing and spent many happy days at his favorite Utah ski resorts, fishing on the Provo River and for a time, long distance running where he enjoyed participating in 5k events. Later in life his garden became his passion and a true source of joy and belonging for all those who spent time there.

He recently renewed his interest in fly-fishing and learned the art of tying flies. In his final days he gave each family member several of his hand-crafted flies encased in a Ettinger Dental Lab clear plastic box as a token of his deep and abiding love for them.

Gene loved people and people loved him. He talked easily with those he met and made them feel comfortable and listened to. Gene was well-known at his favorite restaurants and in his circle of influence. His home was always open to family and friends. He leaves a legacy of kindness, patience, unconditional love and endurance.

Gene was a devoted husband and father. His testimony in our Savior, Jesus Christ, was foremost on his mind as he said goodbye to his family before his death. He leaves behind his beloved wife and eternal companion of 55 years, Sandy; his children Bryan (Megan), Janae (Reed) Hobush, Todd, and Gena; 13 grandchildren and 10 great-granddaughters; his brother Stacy (Lesa) of Reno, Nevada, and his sister Adria (Mike) Schmidt of Las Vegas, Nevada.

Receive notifications about information and event scheduling for Eugene

We encourage you to share your most beloved memories of Eugene here, so that the family and other loved ones can always see it. You can upload cherished photographs, or share your favorite stories, and can even comment on those shared by others.

Posted Feb 12, 2021 at 01:08am
Sandy, You know how much both Jim and I both loved and respected Gene for his quiet and steadfast goodnatured personality. He never failed to make us feel welcome when we were around. I wish we had spent more time with you both. I especially cherish our days together in Garden Grove so many decades ago. I love you, dear one. Don't ever forget that!
Your loving
Monte Mortensen
Comment Share
Share via:

Posted Feb 11, 2021 at 10:54pm
Sandy, we love you and Gene. We have fond memories of how Gene always had a big smile and a wave as he passed us on the street. It always lifted our spirits. Also, any time we came to your door, you and Gene were always so very welcoming. Little things like these always made a difference to us. Please call if we can be a help with anything. Richard & Joyce Heaps
Comment Share
Share via:
DA

Posted Feb 11, 2021 at 06:23pm
So sorry to read of Gene's passing in the Provo Daily Herald. I was a dental associate of Dr. Gary Matthews back in 1978-1979 when he was at the Doctors Park location in Provo. I got to know Gene from chatting with him while he worked on dental crowns -- he was always very good to me. I was interested to learn that he was into fly fishing and tying, which are also my passion, and would have liked to reconnect with him on that basis.

We are so grateful we had many opportunities to get together with Sandy and Gene at family events for little Maeley and Sol and Cortney. Gene always had a smile and a hug to give. He made you feel as if you were a friend. 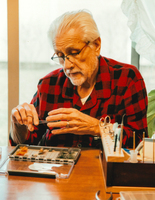 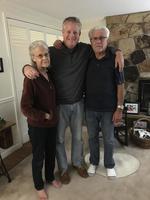