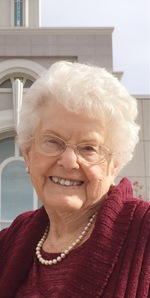 Ila was in good health throughout her life. Only in her last month had she become less mobile and needed some assistance. She was briefly hospitalized at the Utah Valley Hospital before returning to her home and her family’s care.

Ila’s birth on January 24, 1925 was accompanied by a spectacular celestial display. Millions of people were astounded. The New York Times reported: “The moon, the sun, and the stars today staged a display of unequaled beauty…” At the peak of the total eclipse, chickens flew to their roosts.

Ila was the fourth child born to Margaret Gilmour Burt and Charles Luther Carlisle in their red brick bungalow in Millcreek, Utah.

When Ila was 5 years old the Carlisle family sold their home and purchased an undeveloped property west of Payson, Utah. They built a modest three-room home. There followed challenging years during the Great Depression. Hard work was required from every family member. In time, their efforts became the Carlisle Dairy Farm. They began to prosper as they delivered bottled milk to Eureka, a mining town. Their family grew to 10 children: Margaret (Wilson), Helen (Black), Grant, Ila (Rindlisbacher, Peterson), David, Lois (Moore), Ivan, Elmo, Gerry and Joanne (Finch).

Ila loved school and was an excellent student. One of Ila’s teachers wrote a treasured note: “You are a flawless student. I like the precision with which you do things.”

During Ila’s high school days, the specter of another World War loomed. Following her Junior year, Ila went to visit her sister in Burbank California. At a church sponsored dance, she met Lee Rindlisbacher from Cache Valley. He was clean-cut, nice looking and a good dancer. They spent time together sight-seeing, picnicking and talking. Ila and Lee fell in love. They both returned home to Utah. On January 6, l943 Lee proposed to Ila and she said “yes”.

Lee enlisted in the Navy. He became an aerial gunner in the Naval Air Corps and was stationed in the Aleutian Islands where he became very ill. He was diagnosed with diabetes and was shipped state side. He spent several months in the Seattle Naval Hospital to stabilize and control his diabetic condition.

After returning to civilian life, he and Ila were married October 4, 1944 in the Salt Lake Temple. The newlyweds moved to Logan where he enrolled at Utah State Agricultural College, majoring in Dairy Manufacturing.

Ila and Lee moved to Payson. Together with Grant Carlisle, they built a new milk pasteurization and bottling plant, bought delivery trucks and started the Cream O Nebo Dairy. The Rindlisbacher family moved into their red brick home at 95 N. 600 W.

In Payson, their greatest dreams were realized. Ila and Lee would become loving parents of seven children: David Lee, Susan (deceased), Michael, Karen (deceased), Cathy, Mark Charles, and Leean.
When Lee’s health began to decline. Ila was prompted to complete her education at BYU. In June l960, she graduated Phi Kappa Phi with a degree in Elementary Education. Five months later, Lee passed away at age 39.

In the Spring of 1962, the Rindlisbacher Family moved into their newly purchased home at 560 South 600 West, across the street from Wilson Elementary School where Ila would teach for twenty-two years. She said, “To think I get paid for something I enjoy so much.”

Ila took a BYU church history tour. The trip was a lovely, learning experience that helped her realize just how much she missed adult companionship.

A widow friend invited Ila to attend a dance for single adults in Orem. Ila felt quite uncomfortable being there. Mike Peterson was one of the men who asked her to dance. He was easy to talk with and pleasant to dance with. When Ila told him where she lived, he answered, “you have five children. You teach school. Your husband died almost five years ago.” Mike explained that he was a neighbor of Fred and Sarah Baird, who were also Ila’s dear friends. They had also told Ila about a single male friend of theirs who was divorced and had one son. At the time, she was not interested, but now she was.

Mike Peterson began coming to Payson to see Ila and meet her children. Ila took her Mother on a ride to Orem to “scout out” where Mike lived. His yard and home were simply immaculate. Ila and Mike dated regularly. Mike treated Ila wonderfully. Ila felt happy and comfortable with him. She reminded Mike that “he was getting five of the best children in the world thrown in the bargain.”

When Ila announced their engagement, her school principal questioned if he was good enough for her. Other family members made inquiries about Mike and happily received only glowing reports. Mike’s son Mick was twenty-three and a student at BYU. Their parents’ decision to marry was met with mixed emotions from their children. Leean and Mark were thrilled at the prospect. Ila married Mike on October 21, l969, in the Manti Temple.

Together, Mike and Ila enjoyed gardening. Overtime, they turned a kid-friendly yard into a beautifully groomed showplace with lovely flower beds and a bountiful vegetable garden. For all Papa Mike’s children and grandchildren he set the high bar for the care of their own stewardship's.

Ila was called to serve a Humanitarian Mission, teaching English to teachers in the Bangkok Thailand Mission. She left the MTC on her 74th birthday. Ila loved the Thai people and Thai food. Ila served in the Provo Temple for several years and later in the Timpanogos Temple. One of her great involvements was indexing names. Many times, as she viewed old documents, she prayed for discernment and felt she was given eyes to see and accurately interpret difficult hand writing.

Ila wrote, “I feel that my life has been rich and full. My joy in my family just continues to grow as does my family.”

A Family Funeral Service will be Saturday October 10, 2020 at 11:00 am in the Canyon View Stake 762 East 1200 North Orem. The services will be available to watch live at www.walkersanderson.com. Friends may come to visit the family on Friday October 9, 2020 from 6:00-8:00 p.m. at the Walker Sanderson Funeral Home 646 East 800 North, Orem or Saturday morning 9:30-10:45 a.m. at the church. Condolences may be offered online at www.walkersanderson.com