To share your memory on the wall of Ivan Call, sign in using one of the following options:

From 1952 to 1958 he attended Brigham Young University and earned his Bachelors of Science Degree in Finance and Banking. During this period he served for two years in the United States Army stationed in Fulda, Germany. He was a bandsman in the army and played the trumpet.

In 1958 he moved his little family to Bloomington, Indiana to study at the Indiana University Graduate School of Business where he earned his MBA degree in 1961 in Banking and Finance and began working on his doctorate degree. He then went to work for the Valley National Bank in Phoenix, Arizona and also taught at Arizona State University.

In 1963, he joined the faculty at Brigham Young University as Assistant Professor. In 1966, he returned to Indiana University for one year as a Faculty Lecturer and worked on his doctorate degree, which was awarded in 1969. Following his return to Brigham Young University in the fall of 1967, he was appointed Associate Professor and in 1976 he was appointed as a full Professor. He served as Chairman of the Business Management Department from 1968 to 1983.

Throughout his life, his wife and family were always his first priority. His surviving posterity includes his son Curtis Ivan Call and his wife, Emma Houghton, of North Yarmouth, Maine and their four children Richard, Catherine Jennifer and Michelle; his son Kevin Allen Call and his wife, Denise Hill, of Orem, Utah and their five children, Jessica, Nathan, Shawna, Brittany and Ashley; his daughter Kelly Call Cordner and her husband, Tim Cordner, of Gilbert, Arizona and their five children, Angell, Ty, Kyle, Tara and Keri; and Kimball Rees Call of San Antonio, Texas. He also had one son, Kyle Steven Call, who died at the age of five months. He currently has 38 great grandchildren.

Dad will always be remembered by his children, his grandchildren, and his great grandchildren for his love, friendship, and sense of humor. He was always fun and interesting to be around and would look for the best and the humor in everyone and in every situation. He enjoyed many activities including skiing, golfing, hiking, and camping, but these were never ends in themselves, rather they were opportunities to be with his family. He was very close to all of his grandchildren and they could always count on him when they needed something, even if it was just someone to talk to. He was extremely well-read and informed on many topics, including history, and always made discussions interesting.

In addition to his university responsibilities, he had other professional pursuits. He served from 1979 as a member of the Investment Committee of the Deseret Mutual Benefit Association and from 1980 as a member of the Investment Securities Committee of the Church of Jesus Christ of Latter-Day Saints. He was also part of a small group of businessmen who founded the Far West Bank of Utah and the Far West Bankcorp in 1975, and he served as a member of the Board of Directors for both organizations from their founding. In February of 1997 he was elected Chairman of the Board for both organizations.

He was a member of the Church of Jesus Christ of Latter-Day Saints and served in many capacities including bishoprics and stake presidencies. He served twice as bishop, once for a BYU ward of married students and once in his home ward in Orem.

He will always be remembered and respected by his business and church associates as someone with a great deal of integrity and understanding and who was very knowledgeable and able to address difficult situations thoughtfully and tactfully.

He was proud of his entire family and all felt of his constant love and support.

His one passionate hobby was bird watching and he traveled all over the world to increase his bird “life list”. When he would visit his children in other parts of the country, bird watching was a part of the normal routine. He would often take his grandchildren and their friends bird watching if they needed to do so for a class. They may have thought it would take a couple of hours but it often turned into a long day.

In addition to his wife Sharlene, he is also survived by his two brothers Steven Taylor Call and John Richard Call. He is preceded in death not only by his dear son, Kyle, but by his parents and his sisters, Leah Call Tidwell and Carrol Call Cripps.

Funeral services can be streamed live at 2:00pm on Friday, May 1, 2020 at walkersanderson.com.
They can also be viewed after the completion at the services on the same website.
Read Less

To plant a memorial tree in honor of Ivan Call, please visit our Heartfelt Sympathies Store.

Receive notifications about information and event scheduling for Ivan

Print
A Live broadcast of services may be watched at www.walkersanderson.com

We encourage you to share your most beloved memories of Ivan here, so that the family and other loved ones can always see it. You can upload cherished photographs, or share your favorite stories, and can even comment on those shared by others.

Posted May 07, 2020 at 04:14pm
Ivan was a respected colleague at the Marriott School of Management. He was one of the pioneers that helped lay the foundation for one of the strongest departments at BYU. The Finance department and the graduates of that department are grateful for the example of Professor Call. Many of the current graduates may not recognize his name but their opportunities to compete with the best finance graduates can be traced to Ivan Call's generation of BYU faculty. He was a kind and respected individual. My love to his family.

Ivan Call was one of my very best friends. When I arrived at BYU in 1987, Ivan and I were assigned to teach different sections of the introductory MBA Finance class. So, we immediately had to work together to create a syllabus, decide on a text and organize all other aspects of the class. I soon discovered how kind and thoughtful Ivan was—and what a remarkable teacher he was. He not only knew the theories and mechanics of Finance, I learned he had lots of real-world experience. He was wise, organized, and devoted to the Gospel. And he had a wonderful sense of humor that put students at ease in his classroom. Ivan was a man without guile. We immediately became close friends. I didn’t realize how close we would become until, one day, I invited him to join me for our lunch hour. We drove to the I-15 Mountain Springs exit south of Provo. We parked next to a swampy area filled with birds. My hobby for many years was “birding” (known also as “bird watching”). I introduced Ivan to the wide variety of water fowl and shore birds we have around Provo: Black-necked Stilts, American Avocets, Greater Yellowlegs, Double-crested Cormorants, etc. He was “hooked.” Years later, Ivan loved to tell people, “That was the most expensive lunch in my life!” A few months later our national Financial Management Association meetings were in Florida. Not only did we attend this gathering of Finance professors, but we stayed a few extra days to search for Florida birds. Since that time, we birded all over Utah and then wandered further afield to Arizona, Texas, California, Colorado and then the big one: Alaska. We went out to the last island in the Aleutian chain: Attu. It is the most coveted birding trip in the U.S. Since Attu is close to Asia, it often draws birds that are never seen anywhere else in the U.S. We both have remarkably patient spouses to permit us to take the time and resources to do such adventures! We took other guided birding expeditions to places like Brazil and Costa Rica. When we led Executive MBA students to Europe, we used our spare time to bird together in Germany, the U.K. and other European countries. What wonderful memories I have of those adventures! When Ivan’s health would not allow him to go on such strenuous birding expeditions with me, we enjoyed getting together to see the photos of a recent birding adventure. I think the last time we were together, not too many months ago, Sharlene, Ivan and I sat in their home eating a Café Rio lunch and looking at pictures of a trip I had taken to Madagascar. It reminded us of all the good times we have shared over these past 33 years.
I will greatly miss my friend, Ivan. I will miss our conversations about faith, family, finance, nature, politics, etc. He was a great man, an ideal man, a man who did much good in the world, a man we can all look to and say, “I hope I can be more like Ivan Call.” 4/30/2020, Ned C. Hill, Dean Emeritus, Marriott School of Business, Brigham Young University

I was able to watch the tender memorial to Ivan this afternoon. I have held him in such high regard from the time I was an MBA student in the mid 1970s, a faculty colleague in the 1980s and benefitted from his advice and counsel as a member of the Investment Securities Committee at the Church from 1980-2009. I pray that the Lord's sweet spirit will be with you at this time of separation. He served his family and the Lord well in his life here. I have no doubt that he was received with loving embraces.

Posted May 01, 2020 at 02:18pm
We are grateful for the friendship and light Ivan brought to our department. Our thoughts and prayers are with you.

Flowers were purchased for the family of Ivan Call.

Posted Apr 30, 2020 at 06:54pm
Our thoughts are with you at this tender time of sorrow and send our prayers for your family to feel peace and comfort now and in the days to come

Flowers were purchased for the family of Ivan Call. 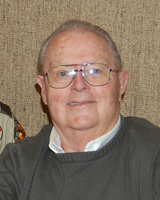