To share your memory on the wall of Jeannette Stonehocker, sign in using one of the following options:

Family was probably the most important thing to Jeannette. It was hard for her to leave home, and even though she lived far from Virginia, she called home, wrote home, and returned home as often as possible to visit and care for them. Her own husband and children were no less important. They first lived in Idaho Falls, Idaho, where Anne was born, then Baltimore, Maryland, where Barbara Jo was born. After a few months they moved to Portsmouth, Virginia, to be close to her family, while Garth left for a year and a half expedition to the Antarctica with his work. This would begin a pattern of work travel that would often leave her alone to care for her home and children. While he was gone, Mark Ridgway was born.

When Garth returned, they moved to Boulder, Colorado, where their lives blossomed, and where Ted (Edward Benjamin) was born. This is where they bought their first house on 605 S. 44th Street. This is where the children grew up, went to school, participated in church and community activities, and were encouraged to spread their wings as they went out into the world. They were looked after and supported by their mother and father in every way and in the best way that they knew how.

As mentioned, the Church of Jesus Christ of Latter-day Saints was very important to Jeannette. She served a six-month (extended to 8 months) mission in the East Central States Mission. She served in Lynchburg, Virginia, and Kannapolis and Roxboro, North Carolina. As a young member, she also served as Sunday School Secretary and Program Coordinator in Portsmouth and Washington, D.C., respectively. In Idaho Falls, she served as the Gleaner Women advisor, and it was there where she earned her M-Men and Gleaner pin. In Boulder, she served in many capacities, as only the mission field can provide. She served as a Primary teacher and secretary, also Parent & Child teacher, Relief Society Secretary and Theology Teacher, Stake Relief Society Secretary, Relief Society President, Meetinghouse Librarian, and genealogy and family history committee member. Probably the calling that most exemplified her love and caring for others and her Heavenly Father was that of Visiting Teacher. We can all take lessons from her in how she fulfilled that calling.

Education was also important to Jeannette. Although she never received an advanced degree, she graduated from Cradock High School, Norfolk Business College, and enrolled in the College of William and Mary. She was an English buff, and we all benefited from her knowledge of English grammar. She never stopped learning, taking classes in business typing, bookkeeping and shorthand, sewing, Advanced Dressmaking and Tailoring, crochet, watercolor, Anthropology, sewing knit fabrics, herbs, etc. Even when she was in her 70’s, she took a writing class.

Jeannette inherited an interest in politics naturally, as her father and family were active in civic affairs. She supported and campaigned for several candidates, and she was an advocate for several causes. One such cause was an effort to defeat the ERA (Equal Rights Amendment), as she fought to preserve the sacred role of mother and homemaker. She was a poll worker for many years. She also worked as room mother in several of her children’s classes, and on the school newspaper.

She and Garth were extremely generous. I’m sure many of you have been recipients of their generosity. One thing that I missed in the later years was going shopping with Jeannette. She had impeccable taste and taught me those same skills.

Eventually, Garth and Jeannette left Boulder and moved to Earlysville, Virginia, a beautiful town outside of Charlottesville, Virginia, to take care of Jeannette’s mother during her waning years. When they returned from Earlysville, Virginia, they moved to Smithfield, Utah, and fulfilled a dream to build a house. They had certainly experienced building and decorating houses in Boulder, Earlysville, Portsmouth, and now Smithfield. Before hardly beginning the undertaking, Garth was diagnosed with cancer, but they soldiered on, completing it and living in it and enjoying the beautiful land, the pond, the ducks and other wildlife for 11 years before he passed on, to be separated from her once again, whereupon she moved to Layton, Utah, to live closer to her children.

The next several years were spent enjoying her children and grandchildren, attending their programs and watching their progress. She spent hours writing her family history, putting together scrapbooks, and organizing and printing photos for herself and many other members of her family, all without the use of a computer.

Until recently, Jeannette kept amazing track of her true friends, those from her childhood, her mission, Boulder, Charlottesville, and Layton. Many journal entries mention luncheons that were organized or dinner invitations to their home or a restaurant with friends.

Arrangements entrusted to Walker Sanderson Funeral Home of Orem. Funeral Services will be Friday, April 9, 2021 at 12:00 p.m with a visitation from 10:30 - 11:30 a.m. prior to services.
A Live Stream of services will begin at 12:00 pm at www.walkersanderson.com for those not able to attend in person. Condolences and memories may be shared with the family at this same website.
Read Less

Receive notifications about information and event scheduling for Jeannette

We encourage you to share your most beloved memories of Jeannette here, so that the family and other loved ones can always see it. You can upload cherished photographs, or share your favorite stories, and can even comment on those shared by others.

Posted Apr 01, 2021 at 03:36pm
Jeanette was an amazing friend. I have enjoyed her friendship for over 20 years. She loved her family dearly. I loved visiting with her and hearing her stories. She was so thoughtful to me and my family and treated us like family. We will miss her.
Burton Family
Comment Share
Share via: 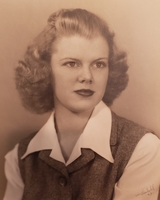