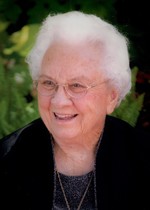 The sixth child in a family of seven children, Abbie June Clifford was born in a farmhouse in Menan, Idaho, on October 17, 1921, to Grace Eames Stephens and Orrin Caton Clifford. A shy child who loved books and flowers, she learned to do dramatic readings from her sister, Helen. Her confidence grew as she became involved in activities at Midway High – a student body officer, editor of the school paper, and an actor in school plays. She received many honors and was respected by both students and faculty. Her year at Idaho South College in Pocatello, Idaho, opened a new world of academics and made her a star of the theatre.

Always in high demand for dates, in her senior year of high school, she finally found a place on her Riverside Gardens dance card for Adrian Nelson from Lorenzo, Idaho. They married in the Salt Lake Temple on August 29, 1941. June lived with Adrian’s father to help with the farm cooking and later with her parents while Adrian went off to war. Their first son, Sheldon, was born in the Idaho Falls hospital.

Adrian’s post-war career as a soil scientist took them to Walla Walla, Washington, where children Ron and Judy were born. A job promotion took them to Spokane, Washington, the birthplace of daughters Laura and Melissa. Meridian (Idaho) was the family’s home when Adrian retired from the Bureau of Reclamation. Following retirement, Adrian and June settled in Orem, Utah in 1977. Adrian passed away in 1997. For nineteen years, June remained in their Orem home before moving to the Courtyard at Jamestown in Provo, Utah.

A career homemaker, June created a life for her family that was the envy of all who knew her. Childhood for the Nelson children was idyllic. Books, music, and every opportunity her children desired was provided for their growth and enjoyment.

June’s father taught her to work hard, which June indicated was the secret to long life. Her mother taught her to love flowers. June’s flower gardens were award-winning, and she deliberately grew the types of flowers she could arrange for her home and gift to others. As a life-long learner, June took painting lessons for twenty-five years, developing her considerable talent and creating over 250 oil, watercolor, and tole paintings, which she gave to family and friends.

Her most important legacy to her friends and family is her example of true Christ-like living. His attributes were seen in her life as she lovingly and humbly sought opportunities to serve, lift, and nurture others. Two comments that always surface when people talk about June are, “I want to be just like June when I grow up” (usually said by adults) and “June touched so many lives.”

In her later years, June’s wonderful Orem neighbors and ward members returned the love and service she had given for so long. Likewise, the staff at Jamestown grew to love her as they tenderly cared for her. She became a favorite as she reached out to struggling residents and expressed gratitude for every service given to her. There is no adequate expression of praise and appreciation for her home healthcare nurse, Sara Vaitohi, and her expert care and love.

June will be missed by so many, but her example will continue to teach and inspire as all who knew her “try to grow up to be like June.”