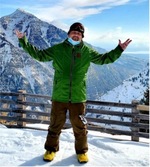 Words cannot express the deep-seeded sorrow which comes with the passing of our beloved son, brother, father, uncle, friend on March 10, 2022. He was gone all too soon. At his passing, we are choosing to remember how he lived, not how he died.

Justin was born in Madras, Oregon on March 18, 1980. With his parent’s divorce when he was just two, came the opportunity to have two full-time homes, and additional parents and grandparents to love him along the way. With his adventurous spirit, it was probably a blessing that he had two sets of parents throughout most of his life!

He lived life on his terms and made sure it was full of adventure and opportunities. For him, “play time” was always a priority and he made the most of it... from skiing and snowboarding at Sundance to boating and wake surfing at Lake Powell and Discovery Bay to ziplining and four-wheeling at the cabin. Full-time employment was only a means to enjoy the “finer things in life.”

Justin graduated from Utah Valley University with a bachelor’s degree in business. He had entrepreneurial skills that he used in an assortment of professions, most recently working with cell phone tower companies on site acquisition.

He was the favorite uncle among his nieces and nephews as he always found time to engage them in a game of some kind. But the love of his life was his son, River. No parent ever loved a child more. River and Justin were the best of friends.

He was preceded in death by his maternal grandparents, his sweet Nana, and his beloved brother, Jeremy. He will forever hold a place in our hearts.

In lieu of flowers, the family suggests considering a donation to one of the following organizations: Live On Utah (Suicide Prevention Coalition), NAMI (National Alliance of Mental Illness) of Utah, or AFSP Utah (American Foundation for Suicide Prevention).