To share your memory on the wall of Kitt Salter, sign in using one of the following options:

Kitt drove a school bus for the Provo School District for many years and the friends she met there have become her lifelong friends. She loved camping in the Uinta mountains, especially Lily Lake with family gatherings. Her family and friends had many loving names for Kitt: Kitty, and one brother lovingly called her “Rapunzel”. She was a lover of music, especially western music and loved dancing. Two weeks before her passing she was dancing in her living room with her grandson and brother-in-law. She was a kind and caring person, who invited many into her home if they needed a place to live.

The family would like to thank Rebecca Isaacson, Bobbi of North Canyon Clinic, Dr. Brandon Barney and Dr. Nathan Rich, Intermountain Cancer Center, Envision Hospice, her grandsons who so willingly moved from Arizona to take care of her during the past 3 months of her life, Bergon & Ra’Cheal for the time they spent caring for her, her closest friend, Sheila Daley for always being there for her, and her brothers and sisters for the support they have given during these difficult times. She is now free from pain and the challenges life has thrown at her.

Private graveside services will be held at a later date. Condolences may be offered online to the family at www.walkersanderson.com

In lieu of flowers please consider a donation to the American Cancer Society.
Read Less

Receive notifications about information and event scheduling for Kitt

There are no events scheduled. You can still show your support by sending flowers directly to the family, or planting a memorial tree in memory of Kitt Salter (Clawson).
Plant a Tree

We encourage you to share your most beloved memories of Kitt here, so that the family and other loved ones can always see it. You can upload cherished photographs, or share your favorite stories, and can even comment on those shared by others.

Plant a Tree in Memory of Kitt
Plant a tree 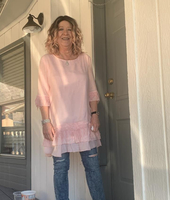