To share your memory on the wall of Lalah Cameron, sign in using one of the following options:

Lalah Nielsen Cameron passed away peacefully at her Orem home on September 19, 2020. Lalah was born on March 4, 1932, in Kimball, Idaho to Leslie Moroni and Carrie Landon Nielsen.

She grew up in the agricultural community of Kimball with one younger brother, Val Dean, and four older brothers and sisters: Lester, Erma, Donald, and Alta Fay. She remained devoted to her parents and siblings throughout her life.

After graduating from Firth High School, Lalah moved to Pocatello, Idaho for employment. It was in Pocatello where she met her husband, James B. Cameron, while he was on leave from military service. After a year of dating and James’ military discharge, Lalah and James married in the Idaho Falls LDS Temple on June 26, 1953.

James’ employment as a professor took the new family from Idaho to Los Angeles, back to Pocatello, next to Bozeman, Montana, and finally to Orem, Utah in 1969. Lalah and her family remained in Orem for the remainder of her life except for fifteen months living in Tripoli, Libya, where James was teaching during a sabbatical from BYU. Their union was blessed with four children: Linda Cameron Myers (Craigh) of Norfolk, Virginia; Stephen V. Cameron (Marianne) of Weston, Connecticut; Douglas J. Cameron of Sandy, Utah; and Brian L. Cameron (Kelly) of Houston, Texas. Lalah has five grandchildren (Carrie, Chase, Audrey, Cate, and Dane), with the youngest arriving only one week before her passing.

A devoted wife and mother, Lalah always had a smile and a hug for her family and friends. Lalah was a lifelong and enthusiastic member of The Church of Jesus Christ of Latter-day Saints. She was unfailingly cheerful and conscientious in executing her church callings, most recently as a temple worker serving elbow-to-elbow with her husband in the Mount Timpanogos LDS Temple. Lalah felt enriched to serve and cherished the many life-long friendships made over her decades of service.

Lalah’s life was claimed by complications of Alzheimer’s disease. She was preceded in death by her parents and five siblings. She is survived by her husband of sixty-seven years, James, her four children, and five grandchildren.

An open viewing will be held at the Walker Sanderson Funeral Home in Orem, Utah on Sunday, September 27, 2020 from 1:00pm to 3:00pm. A family memorial service will be held at 2pm Monday, September 28, 2020 at the Walker Sanderson Funeral Home. Friends and extended family are invited to view the Monday memorial live or after the event on the funeral home's website (www.walkersanderson.com). Please see the website for details about online viewing of the service.
Read Less

Receive notifications about information and event scheduling for Lalah

We encourage you to share your most beloved memories of Lalah here, so that the family and other loved ones can always see it. You can upload cherished photographs, or share your favorite stories, and can even comment on those shared by others.

Posted Sep 27, 2020 at 08:20pm
I will miss Lalah’s beautiful smile, her hugs and her teasing. I am sorry for your loss but am grateful for the fact that Lalah’s mind is now free.
Comment Share
Share via:
KP

Posted Sep 24, 2020 at 01:26am
Dear Jim and family, It is with sadness that I read of Lalah's passing. Even though we haven't seen each other for a few years (mostly because I moved to AF in 20016) I treasure our long friendship through BYU faculty and attending the same stake. Lalah always had a wonderful smile as we greeted each other. When Glen passed there was genuine and sincere sadness expressed to me by both of you. Glen always considered you, Jim, as a good friend and colleague. Good memories are still with me. Please know that I will be thinking of you and praying for you and your family. God bless you with peace and comfort and love.

Thank you very much for your comment. JBC
BH

Dear Lalah was my precious friend and neighbor for many years. She was a very talented and gifted person in many ways. She was a master seamstress and came to my aid many times when difficult circumstances occurred. I'm so grateful she was a part of my life, blessing me and my family many times. She had a testimony of Jesus Christ, and I loved her for that. She lived a valiant life and I'm happy for her she has graduated into her next estate being reunited with her wonderful mother, her father and siblings. 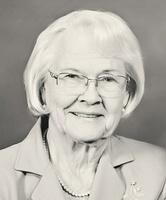