To share your memory on the wall of Lesa Flake, sign in using one of the following options:

Lesa G. Carter Flake, beloved wife, mother, grandmother, and sister returned home to her Heavenly Father on April 25, 2021. Lesa was born on May 5, 1968 to S. Gene and Marilyn J. Carter of Provo, Utah. Lesa spent most of her childhood days working on the family dairy farm, playing with neighborhood friends and cousins, and learning how to cook and sew by both her mother, grandmother, and granny.

Lesa enjoyed working as a secretary and salesclerk, but the best job she ever had was that of being a wife and mother. Lesa married Aaron W. Colby on October 7, 1989 and faced many challenges as her and Aaron tried to start their family. After 10 years of marriage, they were finally blessed with a beautiful daughter, they named Tanya Alese Colby, but unfortunately Aaron passed away just a few years later.

Luckily in 2007 Lesa met a wonderful man named Jon Jordan Flake and they were married on September 8, 2007. They united their lives and children, and together were blessed with a son of their own, Jordan Gene Flake, named after his father and grandfather. Lesa and Jon spent many wonderful years together as they raised their children and enjoyed being a family. Lesa especially loved to travel the world. She enjoyed many cruises, vacations, holidays and outings with her friends and extended family.

Lesa was a faithful member of the Church of Jesus Christ of Latter-Day Saints. Lesa will be incredibly missed by so many!

Funeral Services will be held on Friday, April 30, 2021 at 11:00 a.m. at the LDS Chapel located at 3111 West 1390 North, Provo, Utah. Friends and family may call prior to the services at the church from 9:30-10:45 a.m. Interment will be at the Provo City Cemetery under the direction of Walker Sanderson Funeral Home of Provo.

Special thanks to friends Nikki Christensen, Officer Mark Jackson, Bishop Knowlton, and the many family and ward members who have given so much love and help to the Flake family.

Arrangements entrusted to Walker Sanderson Funeral Home of Provo. Condolences and memories may be offered to the family at www.walkersanderson.com
Read Less

Receive notifications about information and event scheduling for Lesa

We encourage you to share your most beloved memories of Lesa here, so that the family and other loved ones can always see it. You can upload cherished photographs, or share your favorite stories, and can even comment on those shared by others.

Posted May 06, 2021 at 01:00pm
I am so sorry to read about Lesa's passing. I have known her for many years and she was a good friend to my daughter Holly. I feel bad for her family
Jean Mulliner

Posted Apr 29, 2021 at 02:04pm
Julie and Wendy,
We can't imagine the overwhelming sadness you are feeling, and no words can express how very sorry we are for your loss. But know that we are here for you and we love you. Whatever you need, day or night, rain or sunshine, remember we are here for you!
Love, David, Leora, Michelle, Nikki, Ryan Vincent & Families
Comment Share
Share via: 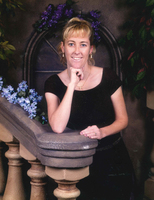