To share your memory on the wall of Lester Minner, sign in using one of the following options:

Lester Alan “Les” Minner was born October 2, 1927, in Gardena (now Los Angeles), California, to Hester and Clifford R. Minner, Sr., and passed away November 11, 2020 in Provo, Utah from Covid-19. Les attended school in Los Angeles, graduating from George Washington High School in 1945. He then joined the U.S. Navy at age 17, and after serving briefly on the seaplane tender U.S.S. Norton Sound, was transferred to the aircraft carrier U.S.S. Valley Forge, the Flag Ship of Task Force 38 as it circled the globe. Upon returning to port at the completion of his enlistment at age 21, Les immediately entered the University of Southern California and subsequently graduated with a Bachelor of Engineering Degree in Civil Engineering. Les then worked for many years in the water industries of Southern California, for both private and public firms, including his own engineering firm, and retiring as the Engineer of Design and Construction of Eastern Municipal Water District in Southern California. During the Korean War, Les served in the 496th Air Police Squadron of the USAFR.

Along the way, he and his lifelong companion, Jeannine were married June 19, 1955 and later sealed in the Los Angeles Temple of the Church of Jesus Christ of Latter-day Saints. He then served in numerous church callings, including Branch President, Bishop, High Counselor, and Stake Executive Secretary. After their mission to Palmyra, New York, he and Jeannine were Ordinance Workers in the San Diego Temple.

Les became the father of two daughters and the grandfather of two grandchildren. Les and Jeannine relocated to Orem, Utah in 2000 to be closer to family. After losing his sweetheart, Jeannine, in 2016, Les resided at the Legacy Assisted Living Facility in Provo, Utah. Les lead a life of service and dedication to his family, church, community and country. He will be greatly missed.

Les was preceded in death by his parents, brother, Clifford Robert “Bob” Minner, Jr. and his wife, Jeannine Hamblen Minner. He is survived by his two children Melanie (David) Zimmermann of Highgrove, California, and Meredith (Matthew) Donaldson of Orem, Utah, and grandchildren Abigail Donaldson and Maggie (Kyle) Pulsipher of Provo, Utah. He is also survived by Madelyn Minner of Missoula, Montana, wife of Les’ brother, Bob (deceased).

Due to COVID, private funeral services will be held Tuesday, November 17, 2020 at the Walker Sanderson Mortuary, 646 East 800 North, Orem, Utah. Interment will take place at the Orem, Utah, Cemetery. Condolences may be offered to the family online at www.walkersanderson.com.
Read Less

To plant a memorial tree in honor of Lester Minner, please visit our Heartfelt Sympathies Store.

Receive notifications about information and event scheduling for Lester

We encourage you to share your most beloved memories of Lester here, so that the family and other loved ones can always see it. You can upload cherished photographs, or share your favorite stories, and can even comment on those shared by others.

Plant a Tree in Memory of Lester
Plant a tree 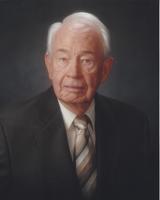