To share your memory on the wall of Linda LeGaye, sign in using one of the following options:

She graduated from LDS seminary and Skyline High School in 1965. While there she took self help certification class, participated in Choir. Was Skyline's Miss Smile. Runner up to Utah miss smile from the Utah Dental Association. She won 2 national forum awards for photographic modeling which were displayed nationally and displayed in the empire room in the hotel utah. She graduated from LDS business collage with a degree in fashion merchandising. Later became a custom window dresser and some of the window dressings we're she later worked at Wolf sporting goods stores. Then to junior buyer and later from highest quota salesperson to ladies sportswear department manager in Orem, Utah. She designed her flower girl dresses' soft cloth dolls, including an original clown doll called Charlie Pom-pom.

While in collage she had been active in choir, active Rush president and Vice-president of Kappa Ki Chapter of Lambda Delta Sigma Sorority and working part time. Other schooling included classes at The University of Utah in marketing advertising and also 66 hrs.in basic real estate at Utah Tech. She was runner-up in Miss Beauty World for Miss Utah. which was televised and also runner-up for Miss U.S.A. Universe for Utah. She won a modeling scholarship to Paris-all modeling school, was a Dior runway model and Graduated with certificate from Miss Bridget Berry, consultant to Miss Joan Crawford.

She was an extemporaneous Model on a Farmer's Insurance calendar taken in Hawaii. A Demo an Expert Food and product Demonstrator marketing sales trainer and trained her daughter to do the same business with her by starting to do food sampling in many multiple grocery store chains. Worked for Pacific Bay Baking and professional announcer, Linda had a near Masters Degree equivalent owning Celebration Expert Demos and Celebration Gifts and Gallery Collectables .As part of BYU education week and continuing education, she has been known to interduce well-known speakers there.

She loves family Genealogy and it's importance was a member of the Utah Daughters of Pioneer's and has royal lineage as well. She enjoys shopping arts, poetry writing music movies fishing and nature photography. Was also a past program director of the famous McCurdy Doll Club-museum. She now belongs to Dollie Partners doll club is a club historian and devotes time jointly with other members for Sub for Santa for the Ronald McDonald House and the Utah State Festival of Trees. Volunteering time and soft cloth dolls, toys and related items for children in need of hospitalization at Primary Children's Medical center.

She was divinely healed from having an operation as a small child and has close relationship with her heavenly father and his son Jesus Christ. Has been uplifted, healed and protected many times and has been a Sunday School teacher, ward librarian and a visiting teacher.

She has been to all the western states Canada Mexico, and Hawaii she has been on a Caribbean Cruise on the Norway. Linda married Ned W Walker where she has her two children they married 20 July 1974 and was later divorced. She had a second marriage to Gerald Dean Mckamey (1925 - 2006) aka (Jerry McKamey which was short lived but the family really cherishes that Parrott that you bought us.

She loved animals and has owned many dogs and cats. She worked doing In store demos and doing boutiques until having a diabetic stroke which caused her to lose the loss of her left eye 7 yrs prior to her death.

Her funeral will take place this Wednesday at the Walker Sanderson Mortuary directions 646 East 800 North # 4241 Orem Utah 84097 you can send flowers there if you wish.

If not flowers please donate to any Diabetes and or Dementia foundation. Thank you all the Condolences so far we appreciate it. The Lawler's and The Walkers.

Condolences may be offered to the family at www.walkersanderson.com.
Read Less

To plant a memorial tree in honor of Linda LeGaye, please visit our Heartfelt Sympathies Store.

Receive notifications about information and event scheduling for Linda

We encourage you to share your most beloved memories of Linda here, so that the family and other loved ones can always see it. You can upload cherished photographs, or share your favorite stories, and can even comment on those shared by others.

Plant a Tree in Memory of Linda
Plant a tree 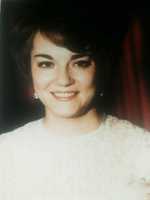