To share your memory on the wall of Lowry Harris, sign in using one of the following options:

After high school, he hitchhiked to Alaska for a seasonal job at a fish packing plant. His sense of adventure and desire to live fully and enjoy life guided him. After serving a two year LDS mission in France, he enlisted in the US Army and spent two years serving in Germany. We have heard many stories of this time in his life including traveling around Germany as the top sharpshooter and target practicing in Nuremberg. Being the assistant to the Field Commander, because of his excellent typing skills, enabled him to travel around Europe in his new VW Beetle, which he shipped back to the states (claiming it to be the first one in Utah). He also stood guard at a theater so Elvis could watch a movie. He married Jean Ann Sardoni in 1960 and were blessed with eight children, eventually settling in Lindon. They later divorced.

Those who knew Lowry remember him for his honesty and integrity, his generous nature and care for people as evidenced by his choice of profession. After attending BYU, in 1967 he attended Palmer College of Chiropractic at Davenport, Iowa. He supported his family of seven through four years of chiropractic school with his janitorial business. After a long day of classes, then dinner, he would go work, come home to study well into the night before getting up early the next morning to do it again. In 1972 he opened The Orem Chiropractic Center on State Street. He served the community for 41 years retiring in May of 2013, one week before his 79th birthday. He enjoyed the many associations he developed through those years.

Lowry’s natural talents and abilities helped him enjoy many things in life. He could play several instruments including the piano, draw and paint, photograph the landscape, and drive a fire truck and ambulance. His patriotic heart and military service influenced him throughout his life, from teaching his children how to clean during ‘GI Parties’, to his love of exercising his Second Amendment rights, to his studies of the Constitution. He, along with his brothers, began the tradition of shooting the cannon at the beginning of the Fourth of July Parade, and did that for several years. He was proud of his children’s accomplishments and enjoyed golfing, shooting guns and riding motorcycles with us and could then put our backs into alignment.

A viewing will be held at the Walker Sanderson Funeral Home, 646 East 800 North, Orem on Thursday June 18, 6 - 8:00 pm and Friday June 19, 10 - 10:45 a.m. at same location. Following the viewing a private graveside service will be held at East Lawn Memorial Hills in Provo. Condolences may be shared with the family online at www.walkersanderson.com
Read Less

To plant a memorial tree in honor of Lowry Harris, please visit our Heartfelt Sympathies Store.

Receive notifications about information and event scheduling for Lowry

We encourage you to share your most beloved memories of Lowry here, so that the family and other loved ones can always see it. You can upload cherished photographs, or share your favorite stories, and can even comment on those shared by others.

Posted Jun 17, 2020 at 09:12am
Of all my friends, "Low" was on my most favorite list. From family outings, dove and goose hunts, cruising in his Mersedes, to just a visit at his home or office in south Orem...it was all a pleasure. Of course a visit to his office always meant "an adjustment". Forever I have called him my "San Salvador, Super Sacroiliac Snapper".....and still will continue to do so. Thank you Low for be such a kind, fun and dear friend.
My kind and loving condolences to his wonderful family.

Thank you Gary, we as well remember you with fond memories and one of my dad’s funniest friends!!! All our love, Julie Harris and clan....
CS

Posted Jun 16, 2020 at 03:04pm
My condolences to Clark, Diane, Dave and the rest of the extended Harris clan. Though I never met your dad I know he raised some great kids. It's been a pleasure knowing you guys. Hope he and Steve are kicking back and enjoying each other's company now. Sending hugs to all.
Comment Share
Share via:
CP

Posted Jun 16, 2020 at 10:18am
I will always remember Lowry as being a kind, friendly thoughtful man. He worked on our family many years as a chiropractor and we appreciate his diligence!
Comment Share
Share via:

My heart hurts to hear that he passed away. Our family jokingly called him the Quackerpractor because he “cwacked” our backs. He was amazing and we were so sad when he retired. The world has truly lost an incredible man. 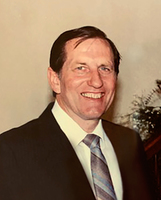