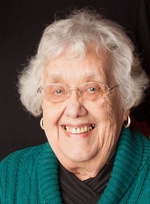 MARGARET ANN “PEGGY” (ATWOOD) STERLING
Peggy Sterling, 91, passed away on September 14, 2020 at her home in Orem, Utah. Her daughter Sara and son-in-law Ron were with her to the end.

Peggy was born on June 6, 1929 to Merle and Ann Atwood at Anamosa, Iowa. She is survived by her younger brother Dale Atwood and his children Brett, Mitch and Cari Atwood. She was preceded in death by her husband Glenn and her grandson Matthew Lee. She is survived by her son Scott Sterling of Wasilla, Alaska, daughter Sara Lee and son-in-law Ron Lee of Orem, Utah and grandchildren Mike Lee and his wife Heather, Shauna (Lee) Redford and her spouse Mike Redford, Chris Lee, Ricky Lee, James Lee and John Lee, along with eight great-grandchildren.

Peggy graduated from Anamosa High School in 1946. In 1950 she graduated from Lutheran Hospital School of Nursing in Moline, Illinois. Peggy worked as a registered nurse until she retired in 1993. During her career she particularly enjoyed working as a surgical nurse. Peggy's many friends and colleagues remember her as skilled, compassionate and a humorous story teller. She diligently pursued continuing professional education throughout her career.

Peggy married USAF airman Glen Warren Sterling (d. 2003) at Honolulu on May 9, 1953. Their son Scott Atwood Sterling was born on August 24, 1954 at Tripler Army Hospital. In 1956 the family moved to enable Glenn to enroll at the University of Iowa. Peggy worked at the VA hospital. Their daughter Sara Ann was born on April 21, 1960. Through the years Peggy lived in Hawaii, Iowa, California,Washington State and Utah. In 1993 Glen and Peggy made their retirement home in Payson, Utah.

Peggy volunteered at the Payson Senior Center. She spent many happy hours with her close friends Gus and Peggy Mohr, their daughter Carly and their loyal dog Max. She also was close friends with Bill and Joyce Sederburg. Peggy and Max were the very best of friends.

Peggy loved children, dogs and Hawaii. She played pinochle, cribbage and board games, read widely and enjoyed watching football, including college games featuring the Iowa Hawkeyes. Blessed with a sharp mind and memory, Peggy was an avid reader, always voted and stayed up on current events. Having lived as a
young woman during World War II she believed strongly in being a well informed good citizen.

A celebration of Peggy's life will be held at a later date. You are invited to share condolence and memories with the family at www.walkersanderson.com.