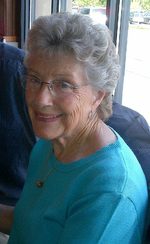 Our loving mother, grandmother, sister, friend and wife, Marva Crosby Heal passed away peacefully on July 7, 2020 at Summerfield Retirement Assisted Living Center in Orem, UT. Marva was born December 29, 1929 in Delta, UT to Stephen Abbott and Mina Wright Crosby. She started her education in Delta, continued it in American Fork, then in her sophomore year her family moved to Spanish Fork where she graduated from high school. Marva attended Provo Beauty College and graduate in 1949 as a license beautician.

Marva met her life-long sweetheart James Milton Heal on a blind date after he returned home from World War II where he served in the Navy. They were married on January 26, 1951in Spanish Fork, UT. Marva was sealed to James on March 6, 2010 in the Mount Timpanogos Temple.

Mom will be greatly missed by her five children Michael (Jeri) Heal, Debbie (Brent) Miner, Steven (Kelly) Heal, Pam (Gary) Thacker, and Bradley (Marianne) Heal. She has 18 grandchildren and 50 great grandchildren. She also has one surviving sister, Gwen (Dale) Pierce who will also greatly miss her. She is preceded in death by her parents, her brothers Floyd, Ralph, LaDon and Spencer, plus her sister Noreen and a great grandson Cooper.

Mom stayed at home and raised her family before she started her working career. She worked for Arctic Circle for five years, then she and her sister Gwen opened Brides World in 1979. Mom loved to work in her yard, especially in her rose garden. She and James spent many winters in Arizona, square dancing and making Kachina dolls before James passed away in 2009. Her greatest joy these past several years was “watergation” with her great grandchildren. Mom loved to crochet, and she made over 300 afghan blankets for her family and friends.

The family will be holding a graveside service for Marva on Monday, July 13th at the Orem City
Cemetery for family members only. They will also be holding a family viewing on Sunday, July 12t h at Walker Sanderson Funeral Home, Orem. The family would like to thank Summerfield Retirement staff and administrators for their love and kindness they showed toward Mom, especially her nurses, Gwen, and Nate.

Condolences may be offered to the family and a live broadcast of services may be watched Monday, 11:00 a.m.at www.walkersanderson.com