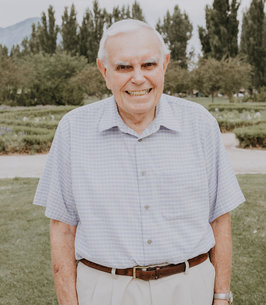 Max Dale Raddatz departed mortality on April 6, 2022, to be joyously received by his dear Joanne, from whom he’d been separated for nearly a year, and other family and loved ones on the other side whom he hadn’t seen for a very long time. He passed peacefully at his home in Lindon, Utah, where he’d been given loving, devoted, around-the-clock supportive care and ministering by sons and daughters, their spouses, and grandchildren. Dad/Grandpa/Dale left us two days before his 92nd birthday.

The only child of Maximillian Frederick Raddatz and Lillian Hansen Jensen, Dale was born April 8, 1930, in Salt Lake City, Utah. Before Dale’s birth, his father, Max, had been a US Marine, stationed in the Republic of China. While on leave to Salt Lake City, he found that Lillian, his love, had innocently attracted other suitors in his absence. Seeing that his relationship with her might be in jeopardy, Max sought and received discharge from the Corps and married his sweetheart. Dale came along in 1930, but the father–son relationship, sadly, was short-lived; Max died unexpectedly when Dale was thirteen years old. With that, Dale’s childhood ended abruptly. He was tasked with heavy responsibility, becoming a major source of income for the household and support for his widowed mother. School and work before and after school at Morrison Meat Pie left little time for other things. Such responsibility so early in life taught Dale a work ethic that served him and his family well throughout his life. His mother never remarried, and Dale remained a dutiful son to her for the remainder of her life.
While a young man living on Harvard Avenue in Salt Lake City, Dale often noticed three young ladies walking past his house in the evenings, headed for the drug store that stood just around the corner, on State Street. Standing at the kitchen window in his blue pajamas (he had to arise very early in the morning to go to work before school), Dale’s eyes often caught the eyes of one of those girls, a lovely redhead named Joanne. A friendship between the two soon developed. In Dale’s senior (Joanne’s junior) year they sang in the South High School choir together, sharing a ride in a car with another couple to Sunday performances at an LDS ward. Having gotten to know each other, they began dating with a group of friends, their first official date being an evening of dancing, roller coaster rides, and eats at the legendary Saltair on the shores of the Great Salt Lake. It wasn’t unusual for couples in their group to rearrange during the evening, coming home with different dates than they went there with—but not Dale and Joanne. They always went together and returned together. As it turned out, they would enjoy many visits to Saltair, dancing on that beautiful floor overlooking the Great Salt Lake to the likes of Harry James, Tommy Dorsey, Jimmy Dorsey, and Tex Beneke.

Dale graduated South High School in 1947. Joanne followed in 1948, and the two were sealed for time and all eternity in the Salt Lake Temple of the Church of Jesus Christ of Latter- day Saints on February 7, 1951. Thus began an eternal love story, the mortal chapter of which would conclude, to use Dale’s words, as, “Over seventy years of happiness. Pure happiness.”
After marriage Dale enlisted in the US Air Force and was assigned to active service in Clovis, New Mexico, where he and Joanne welcomed their first son, James Dale. Their life adventure then found them back in Salt Lake City with a daughter (Dianne) and four sons (Jeffrey Allen, Mark Frederick, Michael Jay, Douglas John); then moving on to Boise, Idaho, and a second daughter (Joan [Joni]); then to Placentia, California; and, finally, to Lindon, Utah. Dale enjoyed a successful career as a sales representative for General Foods and a number of high- profile sporting goods brands.

Dale was an excellent tennis player and an avid and knowledgeable fan of all major sports. Almost to his last day with us, he looked forward to the sports section of his Monday Daily Herald, which he’d pore over till it was fully consumed and digested. A Utah man was he—a lifelong supporter of the Utah Utes (although in his later years he also followed and supported the BYU Cougars) and he and Joanne rarely missed a Utah Jazz game. Before his grandson Jeremy passed in 2013, the two of them would sit for hours, discussing and processing what the Utah Jazz needed in trades and what the Millers should do to make it all happen. While living in California, Dale had season tickets to see the California Angels play at Angel Stadium, and he and Joanne loved to take children and grandchildren with them to the games. He also enjoyed hunting. In his later years he went deer hunting with sons Jim and Jeff and son-in-law Kevin. In his young married years he found some of his best times hunting pheasant with lifelong friend Dale “Mince” Minson and buddy Jay “Andy” Anderson. After cleaning out the local supermarket of all its snackies and munchies, they’d hit the fields around Tooele and bring home their limits of the tasty bird. As an important side note, the families of Dale and Shirley Minson and Dale and Joanne Raddatz couldn’t have been closer or loved each other more in this life had they been blood relatives.

Dale and Joanne loved to spend time traveling and vacationing with their family. Roughing it in sleeping bags; sleeping in a camper pulled by a station wagon; lodging in a cabin at Yellowstone; relaxing at a beach in San Felipe on California’s Baja, in a custom-fitted camper set on a customized Toyota pickup truck; enjoying a friend’s cabin on Idaho’s Snake River; cruising the Caribbean or the coast of Alaska; driving across Europe—it was all adventure, and it was all family fun. But the family didn’t have to be on the road to have fun. His grandchildren will forever remember the Thanksgiving and Christmas holiday nights spent in sleeping bags on Grandpa’s garage floor—the cleanest garage floor in America, possibly the world—watching their own TV and feasting on the snacks, candy, and soda from the fridge that had been lovingly and generously stocked by Grandpa and Grandma Jo.

Dale’s sense of humor was one for the ages. Whether making Joanne’s eyes roll back in her head and drawing a loving scold from her or making others double over in laughter, his little ditties, jokes, witticisms, sayings, and teasing couldn’t be ignored. And if you happened to draw the duty of being his nurse, hold on to your stethoscope, ma’am; it’s gonna be an interesting ride. But it was all good-spirited fun with Dale. He loved people. He liked to make them laugh. But Dale could also be straight and serious about things he held to be important. And if you overstepped, you didn’t have to read his mind. For instance, if you were a teenaged son planning to call in “sick” from work to spend the day skiing, you didn’t want to let Dad hear about it. You didn’t want to sit down at the dinner table with a hat on your head. You didn’t want to disrespect Mom in his presence, or even let him hear about you having done it. Dale was a gentleman with high standards, a strong work ethic, and a keen sense of responsibility, and he expected the same of others—and especially of his children.

Dale had a strong and abiding testimony of Jesus Christ and was a faithful lifelong member of the Church of Jesus Christ of Latter-day Saints. He served in many callings and fulfilled numerous assignments throughout his life. He and Joanne faithfully completed six missionary assignments for the Church—three at the Joseph Smith Memorial Building in Salt Lake City and three at the Missionary Training Center in Provo, Utah—over a period of about fifteen years. His life exemplified the teachings of Jesus Christ, without hypocrisy. Alongside his beloved Joanne, he taught his children the principles of the restored gospel of Jesus Christ in their home with unfailing consistency. Among his greatest joys was the knowledge that each of his sons served an honorable full-time mission for the Church of Jesus Christ of Latter-day Saints, and that all of his sons and daughters were sealed to their spouses in the House of the Lord. And he departed this life knowing that all are standing faithful and strong, just as he taught them to do, and just as he hoped and prayed they would—and with a prayer on his lips and in his heart that all of his grandchildren and great-grandchildren will find the spiritual joy and comfort, as he did, that come from living the principles of the gospel of Jesus Christ.

Dale is survived by children James (Sue), Dianne (Kevin) Morris, Jeffrey (Linda), Mark (Carie), Michael (Mary), Douglas (Danielle), and Joni (Russell) Rooney; 30 grandchildren; and 38 great-grandchildren. He was preceded in death by his parents, his beloved wife Joanne, and one grandson.

Funeral services will be held at 11:00 a.m. on Thursday, April 14, 2022, at the Church of Jesus Christ of Latter-day Saints located at 56 E 600 N, Lindon UT. Friends and family will be received for viewing prior to the services, from10:00 a.m. to 10:45 a.m. Interment at the Lindon City Cemetery (600 N 200 E) will follow the funeral services.
Condolences and memories may be shared with the family at www.walkersanderson.com where a live broadcast of service can be viewed beginning at 11:00 am.