To share your memory on the wall of Nanette Eccles, sign in using one of the following options:

Nanette Elise Stapp Eccles was born May 5, 1928 in Ogden, Utah to Oscar Still and Eva Estelle Stapp. She died peacefully of natural causes on October 20, 2020.

Nanette Elise Stapp Eccles was born May 5, 1928 in Ogden, Utah to Oscar Still and Eva Estelle Stapp. She died peacefully of natural causes on October 20, 2020.

Nanette grew up in Marysvale, Utah in the loving family of Oscar, Eva, and Nanette's older beloved brother Roy. Nan and her life-long best friend, Emily Sanderson, explored the countryside around their community and grew to love beautiful desert landscapes, horny toads, and cactus flowers. We all loved the tales of her riding the train to Salt Lake with her mother and father, tap dancing performances, and being bounced off Bluebell, the horse, by her brother. But by far the most famous event is when Nan and her brother were struck by lightning while riding in a horse-drawn wagon in the Uintah Basin. She was knocked unconscious and her mother threw her over her shoulder and ran for help. The poor dog didn't make it, or so they thought, until he came-to a day later. She loved to repeat the story and use the frequent excuse for any forgetfulness, "It's because I was hit by lightning." Nan later attended Wasatch Academy Prep School in Mount Pleasant where she gathered diverse friends. Nanette's family moved to Provo, Utah where she graduated from Provo High and entered Brigham Young University to study journalism. Her vibrance and brilliant red hair drew attention. It made her famous in fly-fishing circles as local fishermen sought out snippets of her red locks for tying flies. She was featured in The American Magazine photographed holding a famous red-hair fish fly, one of which was given to President Eisenhower since he was an avid fisherman.

Nanette met and married James Roland Eccles, the quarterback of the 47, 48, 49 BYU football teams. Jim and Nan raised their four kids in Davis County, Utah, though they later divorced. Nanette managed homelife and outside work with assurance. Among other jobs, she held a 25-year career as a case worker in Utah Family Services for People with Disabilities. She was widely respected and honored for her tireless service to families with special-needs kids or adults. Some of her coworkers became life-long friends who stuck together for birthdays, holidays and travel adventures far into their retirement years. Nan spent the last years of her career in her beloved Moab where she earned the nickname Walking-Stick Woman for giving away walking sticks made by disabled adults to hikers she met on the red rock trails. Nan’s respect for the people she encountered in the Native American culture inspired her to encourage her children by giving them names in the pattern of Native American tradition. With each name, Nan expressed in poem or prose her appreciation of each child’s personality and character. By popular demand, she gave similarly encouraging names to grandchildren, nieces and nephews. To avoid being overwhelmed with name requests, Nan had to draw the line at close adult blood relatives with whom she had spent enough time to know.

Her joy as she moved into Friendship Manor in SLC was to continue to befriend and love people, taking genuine interest in their histories and differences. Her kindness was not out of intellectual effort or occupational duties, but out of her truly loving spirit of acceptance and friendliness.

Nan was not overtly expressive about her faith in God, but it was deeply rooted in the Bible and the heritage of the Church of Latter-Day Saints. Nan’s faith and love of God was evident in her acts of love and grace toward people and appreciation of nature. “Everyone who comes to me and hears my words and acts on them…is like a person building a house with a deep foundation on the rock that withstands torrents and shaking." (Luke 6:47-48).

Nanette is survived by her 4 children: Leslie Young, James Vincent (Kathy), Matthew Roland (Tawni), and Jennifer Murphy (Paul); 12 grandchildren: Brooke, Lauren, Anna, Elise, Stefan, Patrick, Jorjana, Savannah, Abigail, Alex, Hannah, and Jackson; and 5 great-grandchildren: Adeleah, Harper, Quinton, Ryker and Killian. Her children, grandchildren, nieces and nephews and their families are indebted to her vibrant life and her gentle lessons as she loved all kinds of people and landscapes with joyful abandon. Gracious thanks to the Brooke and Daniel Leombruno family who took 'Nana' into their home for her last week on earth surrounded by loving family.

Our beloved Nanette will be interred near her cherished parents at the Orem City Cemetery beneath the supine outline of Timpanogos, a mountain she hiked in her youth. Her beautiful life will be honored in a graveside service October 31, 2020 at 1:00 p.m. at the Orem City Cemetery. Much gratitude to Tom Sanderson, son of Nanette's life-long friend, Emily, and the Walker Sanderson Funeral Home for compassionate services.

In lieu of flowers, our mother would thank you for any donations to Allies with Families (https://allieswithfamilies.org), an organization that helps families with children of special needs.

Condolence may be offered to the family online at www.walkersanderson.com
Read Less

Receive notifications about information and event scheduling for Nanette

We encourage you to share your most beloved memories of Nanette here, so that the family and other loved ones can always see it. You can upload cherished photographs, or share your favorite stories, and can even comment on those shared by others.

Posted Oct 26, 2020 at 04:37am
I have and will miss my wonder wonderful friend. So many many memories and road trips I am the only non relative to be given a Indian Name I was her Patch And Mend Woman. Nan was truly a marvelous, gracious person. LOVED by ALL.
My heart is sad and the world will miss her Marilyn

Thank you, Marilyn. She named you well and she loved you dearly. All our best to you, Leslie, Vince, Matt and Jenna.
SS

Posted Oct 22, 2020 at 10:11pm
Aunt Nan although I spent little one-on-one time with you, I loved being at any family gathering with you. My grandpa adored you & both of my parents had tremendous respect for you. You emanated strength & respect wherever you went. Much love to you, all of your children & my second cousins. What a fun and beautiful obituary. 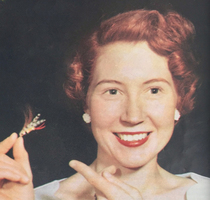 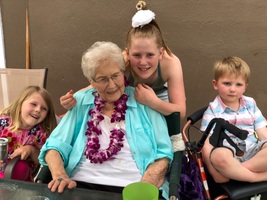