To share your memory on the wall of Norma Cochran, sign in using one of the following options:

Norma Anderson Cochran passed away peacefully in Provo, UT on April 22, 2020 from natural causes. Norma was born in Salt Lake City, Utah on November 1, 1923. She was the fifth of nine children born to Andrew Martin Anderson, and Thyra Jensen Anderson. Money was scarce in her home growing up, but love was plentiful.

Norma met David Clifford and married at the early age of 16. They had four children, Carole, Arlene, Barbara, and David. After the end of her first marriage, she and the children started a new chapter in their lives by moving to California.

In 1968, Norma married A.R. Correa, and moved to San Carlos, CA. She enjoyed being near her daughters and grandchildren who lived near her at that time, making special memories together. Upon retiring, A.R. and Norma moved to Paradise, CA. They spent their time helping with grandchildren there – whether it was picking them up from school, or transporting them to their many activities over the years. The grandchildren remember sleeping over, playing “Monopoly,” watching detective and “I Love Lucy” shows, and in the mornings, eating “Lucky Charms” cereal. After A.R. passed away in 1998, Norma remained in Paradise, enjoying her family and making lifelong friends.

Norma met her Knight in Shining Armor, Grover Cochran, Jr., while visiting her kids in Utah in her eighties. Since nobody was getting any younger, three weeks later they were married and sealed in the Mount Timpanogos Temple for time and all eternity. After 6 happy years of marriage, Grover passed away, and Norma remained in Provo, Utah – enjoying her new extended family, and being closer to all her children and her many (now) great grandchildren. Spending time with family, was one of her greatest joys in life. Her insatiable love of sweets and whatever flavor of Baskin Robbins’ ice cream was closest at hand, could only be matched by her ability to make others laugh. Her authenticity and kindness helped lighten everyone’s spirits, and her great grandchildren especially, have special memories trying on Grandma’s wigs, and sharing ice cream time together. Family – was everything to Norma.

Norma was always positive, even when confined in a wheelchair, cheering up all those around her. Her ability to find the silver lining in trying times, is one of her lasting legacies to her family. She had a cheerful heart, and was endowed with goodness. Norma loved her Savior, Jesus Christ, and has left a Christlike legacy of goodness serving her family and friends. She will be greatly missed, but we are certain her reunion with her Lord and family on the other side of the veil has been joyous and glorious beyond measure!

Norma is preceded in death by her parents, her siblings (Reed, Ronella, Grant, Vernal, Mary, May, & Marsha), her husbands A.R. and Grover, her daughter Barbara, and Grover’s daughter, Marlyn. She is survived by her brother Jay Anderson, her children Carole (Allen) Tidwell, Arlene (Joseph) Ingoglia, and David (Mey) Clifford, 16 grandchildren, 42 great grandchildren, and 12 great-great grandchildren. Norma is also survived by A.R.’s daughter Cookie Molitor and her family, and Grover’s children Gary, Robert, Kent, Kirby, Windy, and their families. Norma loved each of them as her own, and was grateful for more family to love.

There will be a private family viewing on Saturday, April 25, 2020 at the Walker Sanderson Funeral Home in Orem, UT, and Norma will be laid to rest at the American Fork Cemetery, American Fork, UT.
Read Less

To plant a memorial tree in honor of Norma Cochran, please visit our Heartfelt Sympathies Store.

Receive notifications about information and event scheduling for Norma

We encourage you to share your most beloved memories of Norma here, so that the family and other loved ones can always see it. You can upload cherished photographs, or share your favorite stories, and can even comment on those shared by others.

Posted Apr 27, 2020 at 10:09am
"Norma Cochran" brought so many gifts to our life. We will never forget her! She is in our thoughts. The Molitor family. 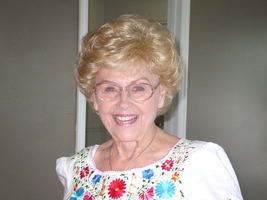