To share your memory on the wall of Oliver Ray Knutson, sign in using one of the following options:

Growing up on a farm in Garland, Utah, Ray learned a strong work ethic. He graduated from Bear River High School after which he served a mission in the Denmark, Copenhagen mission. Before his mission, Ray met Karen Smith, the love of his life at the Utah State Fair while showing pigs. Once he got home, he married his sweetheart in the Logan Temple and started their life of adventures. Ray attended Utah State University, Brigham Young University, and Weber State. He received both his Bachelor’s and Master’s degrees. Ray worked as a teacher, coach, engineer, manager, and bus driver. He also served in the United States Army retiring as a Colonel.

Ray and Karen took on the world together. They loved to travel and Dad was excited when he completed his quest to visit all 50 states. His yearly National Guard assignments were based on where he could pack up the family and give them on-site history lessons, including trips to cemeteries for genealogy research. They were both avid genealogists and added tens of thousands of names to their family tree. When given the opportunity to work in Egypt, they couldn’t pack their bags fast enough and ended up spending 11 years living, working, and exploring there. They also served 3 LDS missions together. They retired to Orem, Utah to be closer to his beloved kids and grandkids, and the BYU Cougars.

Ray was an avid scouter. He earned his wood badge beads then served on staff while his wife earned hers. He was influential in helping hundreds of young men achieve their Eagle Scout Award. In 1984 Ray received the Silver Beaver Award.

Ray had many passions. From childhood, he followed the Dodgers from their beginnings in Brooklyn to Los Angeles. He never missed watching one of their games and instilled the love of baseball in his family. He also loved bird watching, photography, singing in various choirs, watching game shows and collecting coins. He supported his family in their many interests, including games, concerts, plays, blessings, baptisms, weddings, and more. Dressed in a costume made by Karen, he loved to play Santa at family parties. He also played Santa for the neighborhood children, and delivered Danish cookies at Christmas time and chocolate cakes for birthdays. He faithfully wrote cards to each child, grandchild, and great-grandchild for important events. Writing cards for recent birthdays and weddings was his last act of service for his family—writing them while sitting in his hospital bed on high oxygen support. He was the perfect example of Christ-like compassion and generosity, and was loved by all who knew him. He will be greatly missed.

"Our family would like to express our deepest appreciation for Ray's friends at Summerfield Retirement Community, as well as the staff at Utah Valley Hospital who tirelessly took care of the rock of our family. Thank you for loving our Dad."

Interment will be at the Bear River City Cemetery at 2:30 p.m. where he will be laid to rest next to his eternal companion, his children, parents, grandparents, great-grandparents, and more. Military Honors will be performed.

A Live Broadcast of the Funeral Services may be viewed on Saturday, April 17, 2021, 11:00 a.m. at www.walkersanderson.com, where condolences and memories may be offered to the family.
Read Less

Receive notifications about information and event scheduling for Oliver Ray

We encourage you to share your most beloved memories of Oliver Ray here, so that the family and other loved ones can always see it. You can upload cherished photographs, or share your favorite stories, and can even comment on those shared by others.

Posted Apr 30, 2021 at 08:43am
Dear Knutson Family: I am so saddened to learn of your father’s passing. I only found out when I went on Facebook to wish him a happy birthday. I met him and your mother when they came to Michigan and surprisingly moved to Egypt. We were in contact all the years they spent in Egypt and forever after. I so loved being friends with your mother Karen and your father Ray. I copied their tradition of sending a family update Christmas letter every year. In fact, your father responded to my letter this year, and mentioned that he had contacted Covid but I got the impression that he was a survivor. I consider myself very fortunate to have had your parent’s friendship in my life. I will so miss hearing from them about their interesting activities, travels and much loved ever growing family.
Comment Share
Share via:

Posted Apr 22, 2021 at 05:44pm
There are few people that have touched my life so deeply as your mom and dad. I have many tender memories that I reflect on often that have made me a better young man and now adult. Great people are missed because we can't immediately council with them. We do get to cherish the great advice and friendships we make with them. I am so sorry for your loss. I am sorry that I can't be there to grieve with you. Know that I think of you all often, and will continue. You have impacted my life for the good. If any of you ever come to Chicago, please reach out. I promise I won't walk you around the city... we will drive. Sorry Kevin. Bernie and Michelle Fish
Comment Share
Share via:
DC

Posted Apr 15, 2021 at 07:28pm
Dear Family,
We loved knowing Ray and Karen in the Sharon 8th Ward. They both served faithfully and blessed the lives of many neighbors and ward members. It is a blessing to know that Ray and Karen are together again. We pray that the Lord will comfort you at this time of Ray's passing.
Doug and Kay Clark
Comment Share
Share via: 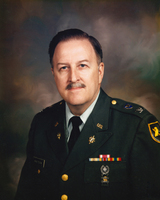