To share your memory on the wall of Paul McMillan, sign in using one of the following options:

Paul had many friends in school and on the Orem High baseball team. He was known as Spud because he picked potatoes on his grandfather’s farm. With his dad and brother, Paul hunted mountains and fished streams across the Mountain State. He was an exceptional bowhunter who could be tracked through the forest by the pine nut shells he left behind him. Hiking, scuba diving, or fishing, Paul loved to be outside. Family fishing trips took him from the beautiful canyons of Lee’s Ferry, AZ to the wild, glacial bays of Alaska. Always together, Paul and Jessie loved traveling, camping, and caring for their beloved animals.

One of his greatest joys was raising his daughter, Lisa, from his first marriage (1968) to Jane Merrell. Paul was then blessed with the adoration of stepchildren after marrying Jessie in 1993. Jessie's family loved and supported him to no end. Paul and Jessie loved their grandchildren immensely.

Paul is survived by his wife Jessie, his brother Brent McMillan (Laurie) of Burley, Idaho, his stepsons, David (Karen) Peat, and Shaun (Denise) Peat, stepdaughter Vicky (Ivan) Lobato, and 13 grandchildren. He was preceded in death by his parents, his sister Karen, and daughter Lisa.

The family appreciates those health care workers and others who made it possible for Paul to remain at home with his family. A private family graveside service will be held at the Orem Cemetery.
Read Less

Receive notifications about information and event scheduling for Paul

We encourage you to share your most beloved memories of Paul here, so that the family and other loved ones can always see it. You can upload cherished photographs, or share your favorite stories, and can even comment on those shared by others. 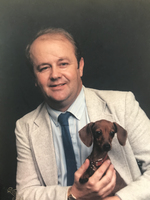