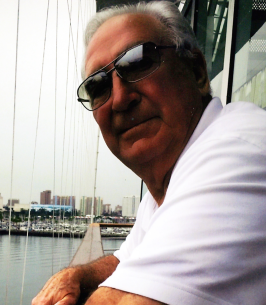 Rex Lynn Kelsey, 78, passed away at Timpanogos Hospital in Orem, Utah, unexpectedly, on March 22, 2022.
Rex was born, June 20, 1943, to Keith Kelsey and Louise Rasmussen Kelsey in Provo, Utah.
At the time of his birth, he was greeted by an older sister, Sherry and an older brother, Ray. As time went on Keith and Louise added to their family, sister Karen, brother Tim, brother Brian and brother David. They all grew up close and had a wonderful childhood.
Rex’s dream was to join the Marines the minute he was old enough, still a little young, his mother had to sign for him at the age of 17.
He was stationed at Camp Pendleton then went off to Okinawa for 2 years. He often said what a great experience it was.
When he got out of the Marines, he went home to look for a job and saw an ad in the newspaper: “Wanted: Kirby Vacuum Salesman” so he thought, “I will do that until I can find a Real job.” (Ha Ha!)
But little would he know he was one of the best salesmen and won numerous awards and trips around the world. He worked for Kirby for over 60 years, working right up until a week before he passed away. He loved what he did!
Back in the late 60’s he met the love of his life, Sherrie Ann Gaudio. They “courted” for awhile and got married on February 13, 1970. Sherrie had 2 children from a previous marriage who he treated as his very own. Rex and Sherrie also had one son together for a total of three boys.
Rex loved spending time outdoors, hunting, fishing, and camping with his grandkids, also 4-wheeling and boating. He was a master on the BBQ and loved to feed everyone that came over!
Rex never met anyone he didn’t like and treated everyone special.
Although we are going to miss him every minute of every day, at least he won’t be in the terrible back pain anymore.
I bet he was so happy to see everyone who went on before him, especially Kaylee. What a great day they must have had!
Rex is survived by his wife of 51 years, Sherrie, son-Warren Booth (Jenny) Pleasant Grove, Utah, son Gregory Booth (Brande) St. George, Utah, son Chris, Orem, Utah. 12 grandchildren and 10 great-grandchildren. Sister-in-law, Saundra Penrod, St. George, Utah, brother, Ray, Duchesne, Utah, Tim, Montana, David (Peggy), Orem, Utah, sister, Sherry Hatfield, Richfield, Utah.
Preceded in death by granddaughter Kaylee Kelsey and grandson Jaydeen Kelsey.
Also survived by many aunts, uncles, nieces, nephews, cousins and many many friends.
Until We Meet Again – We Love You
Services will be held, at the Walker Sanderson Funeral Home, 646 East 800 North, Orem, Tuesday, March 28, 2022 beginning at 11 a.m.
Viewings will be held at the same location, Monday March 28, 2022 from 6 - 8:00 pm, and prior to service on Tuesday, March 29, 2022 from 9:30-10:30 a.m. - a Live Broadcast of Funeral Service will begin at 11:00 a.m., Monday and can be viewed at www.walkersanderson.com where memories and condolences may be shared with the family. Interment will be in the Orem City Cemetery with Military Honors.