To share your memory on the wall of Richard Barnes, sign in using one of the following options:

At age 17, Dick enlisted in the U.S. Navy to participate in World War II. He was sent to the University of Kansas to be trained as an electrician. While serving in the Pacific Theater on a Navy destroyer, he survived both a typhoon and the sinking of his ship at Okinawa.

After WWII, Dick attended a trade school. He was then called as a missionary to the Northwestern States Mission for The Church of Jesus Christ of Latter-day Saints, serving in both Montana and Oregon.

Dick married Donna Joan Miner on April 15, 1950, in the St. George Utah Temple. They made their home in Whittier, California. While in California, Dick served in the bishoprics of two of the wards in which they lived.

Dick and Donna moved to Star Valley, Wyoming, in 1973, where Dick worked with his brother as a contractor. They moved to Utah in 1980, living in South Jordan, Orem, St. George, and finally settling in Orem. Dick served as a temple worker while living in both South Jordan and Orem.

After retiring, Dick served with his wife as a missionary in the Washington Tacoma Mission. Dick loved to build and remodel. He helped build homes for his children, and three homes for himself and Donna.

Posted Jul 27, 2020 at 03:05pm
Dick, you were a great friend and neighbor. You were always willing to provide help when I (and others) needed it. Thank you for helping me wire my basement and figure out why I didn't have any electricity one cold wintry night! I never thought of you as being "old." Your mind and sense of humor always made you fun to be around. You will be greatly missed! I wish I could attend the funeral and tell everyone what a great guy you are. Until we meet again! Bruce
Comment Share
Share via:
RH

Posted Jul 27, 2020 at 12:07pm
I still remember the first time I met Dick and Donna. About 10 years ago as our new home was being built, I would frequently visit it to check on the construction progress and to clean. One day as I was sweeping in the basement I heard some people talking upstairs. I went up the stairs and into the soon-to-be kitchen to find Donna standing there and Dick pulling himself up a 3.5 foot step and crawling in. Dick and Donna introduced themselves as my new neighbors and said the just wanted to take a look at my new home as Dick had been in the business years ago. I told him how impressed I was that they made it into my kitchen as there weren't any steps to get up the large elevation increase and that my own father who was much younger still hadn't come to see my new home because of that incline. We all had a good laugh. Later Dick became one of my faithful ministers and I always enjoyed having him come over for a visit and having him share some of his wisdom and produce from his garden. We love and miss you! Love your neighbors, Rory Howard and Family
Comment Share
Share via: 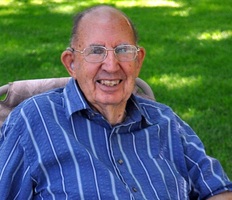 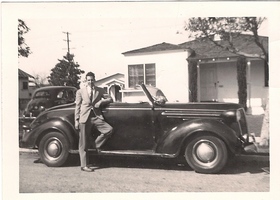