To share your memory on the wall of Richard Henstrom, sign in using one of the following options:

Richard (Rick) Henry Henstrom, our beloved father, grandfather, great-grandfather, peacefully passed away on June 18, 2020, at his home in Provo, Utah.

Rick was born on June 26, 1928 in Salt Lake City, Utah, to Henry and Relia Best Henstrom. He graduated from East High School, and obtained his BFA (1949) and MFA (1953) from the University of Utah. He later obtained an EdD degree from Brigham Young University (1967). Some early professional experience had him associated with KLUB Radio and KSL Radio/TV in Salt Lake City. He later worked at KLOR/TV in Provo, Utah, as their news anchor. He served three years on active duty as an Army Chaplain during the Korean conflict, followed by five years with the Army Reserves in Utah.

Rick met the light of his life, Martha Adams, while working at BYU and they were married on June 17th 1960, in the Salt Lake Temple. Together they raised two daughters and five sons in Provo.

His professional work with Brigham Young University (1957-1994) was associated with the Division of Continuing Education, retiring as Associate Dean. During this time he was involved with the establishment or active management of several division programs including: both Campus and Off-Campus Education Weeks, Extended Campus Lectures, Off-Campus Centers; Study Abroad Center Programs in numerous countries, Travel Study Programs worldwide, Evening Classes, The Washington Seminar, Adult Degree Programs and many others. He was also the Division’s leader responsible for the planning and construction of the Conference Center and the Harman Continuing Education Building. Rick loved his work and enjoyed writing the history of Adult and Continuing Education programs for BYU after his retirement.

Rick was an active member of the Church of Jesus Christ of Latter-day Saints. He served a mission to Sweden and later with his wife as a full-time missionary at the Provo, Utah MTC. He spent his life in church service, especially enjoying his time on the Church Adult Correlation Committee, Instructional Development Committee and as an ordinance worker at the Provo Temple.

One of his great loves was collecting and writing material on Latter-Day prophets and also preparing extensive personal and family history materials. Rick loved to write poetry and would wake in the night to jot thoughts down for his next poem. He had an amazing green thumb and enjoyed his garden and flowers. His grandchildren loved coming to pick (and eat) raspberries with grandpa.

A viewing will be held at the Walker Sanderson Funeral Home, 646 E 800 N in Orem, on Sunday, June 28, from 6:00 to 7:30 pm. Private Funeral services for the family will be held on Monday, June 29, 2020. The funeral will be available on a live stream at 10:00am that day at www.walkersanderson.com. Following the funeral, the internment will be at East Lawn Memorial Hills Cemetery in Provo. If you would like to make a donation in lieu of flowers please consider donating to philanthropies.churchofjesuschrist.org.
Read Less

To plant a memorial tree in honor of Richard Henstrom, please visit our Heartfelt Sympathies Store.

Posted Jun 29, 2020 at 06:55pm
To the Henstrom Family,
We are thinking of you at this tender time in your family. We have enjoyed a sweet relationship with the Henstrom family in one way or another for many years. We are sorry about the death of your father. Rick was a gentleman and a wonderful example of a true disciple of Jesus Christ. We will miss him and continue to miss your mother. We take cancellation in knowing Rick and Martha are together again. We watched the funeral service this morning. We enjoyed the beautiful and heartfelt tributes and the lovely music.
With much love, Reese and Kathryn Hansen

Posted Jun 28, 2020 at 09:13am
The Lord bless your great family. Richard was a wonderful man. I went to school with Martha in Montpelier. She was on year later than me. Best to you. Phillip and Joyce Kunz
Comment Share
Share via:
MS

Posted Jun 26, 2020 at 10:53pm
Debra and I loved Rick and Martha for many, many reasons. Of course "their" Shelley married "our" Paul, and that entitled us to invitations to "pie night" at Thanksgiving time. When I was an MTC branch president, they were serving a mission at the MTC. They always made sure to greet every missionary and branch presidency member with love and encouraging words. Both of them had so many interesting stories and were natural raconteurs. We are confident that their reunion in Heaven will be one for the books. We send our love to to all those that Rick and Martha have left behind. The Adams-Henstrom legacy will live on for generations to come. With loving appreciation, Madison (and Debra) Sowell
Comment Share
Share via:
DM

Posted Jun 23, 2020 at 10:21am
Bishop Richard (Rick) Henstrom, as we knew him when we were students at Brigham Young University, has always had a special place in our hearts. He and his wife, Martha, have been dear friends to us for many years. Taylor Mortensen, my husband, served as a counselor to him in the Bishopric in the BU 7th Ward. One day, Bishop Henstrom mentioned to his ward clerk, Harry Davis, that he should consider dating Darlene Minard. Taylor said the advice was for Harry but he took it. Fifty-six years later we are still happily married. Rick and Martha were just a young married couple when they served in the BYU ward. They had only one child at the time. She was a little two-year-old named Shelley who delighted all of us attending a student ward with her cute antics. Many years later, Taylor and I were serving as missionaries at the Missionary Training Center in Provo when Rick and Martha indicated to us that they would be interested in serving there. They began their mission just as we concluded ours. It was fun to have that experience in common with them. Martha made an apron for me with all my grandchildren's names on it which she gave me when we completed our mission. Rick and Martha were the most loving and kind people we ever knew. We certainly benefited from that love over the years. We are happy they are now reunited. 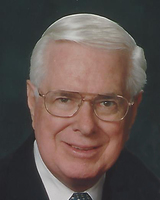 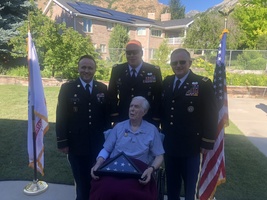