To share your memory on the wall of Richard Hodson, sign in using one of the following options:

Rulon and Zola divorced when Dick was four and his younger brother Dan was about a year old. When he was eight his mother married Waldo Gee Hodson and Dick legally changed his name to Richard Brown Hodson in 1954 and Waldo adopted him in 1965.

His family moved from Salt Lake to Burbank, CA and then to Downey, CA where he graduated from Downey High School in 1954 and began his six years of National Guard service. At age 20 he served a 2.5-year mission for the Church of Jesus Christ of Latter-day Saints in the Central America Mission. On June 24, 1959, he married his wife, Connie Kerby (over 61 years ago), in the Salt Lake Temple officiated by his grandfather Hugh B. Brown.

After graduating from BYU in the spring of 1960 they moved to Downey, CA where he taught Spanish and math at his high school alma mater. He taught junior high for a year in Ojai, CA before joining the newly created Testing Department at BYU in the fall of 1966. In the mid 1970’s he was an assistant director of computer services at BYU and in 1978 began his decade at Valtek (now Flowserve) in Springville, UT. His love of computers and his entrepreneurial spirit led him into several business ventures culminating with RICON Computers on Center Street in Orem which he ran until his retirement.

Dick served the community for many years in the Sertoma and Golden K Kiwanis clubs. He held leadership positions in both and enjoyed his years working at the Snack Shack at the Orem Recreation Center. Active in American Legion Orem Post 72, Dick helped provide Military Honors for many.

A man of many interests, Dick added a small engine to a tandem bicycle and rode it to work in the 1980’s. He ran 5k races and the St. George Marathon in his later years as well.

All are welcome to view live streaming of the funeral at www.walkersanderson.com where memories and condolences can also be shared. Those wishing to attend the grave dedication service following the funeral are welcome. Interment will be at the Orem City Cemetery, 1520 N 800 E Orem, Utah with Military Honors.
Read Less

Posted Feb 02, 2021 at 01:40am
Dear Connie and family. I just went online to the Herald Obituaries and found Dick's. I was just recently wondering how you both were doing. I am so sorry, but I hope you were able to enjoy your senior years comfortably together and prepared yourself to living without Dick for awhile. Gordon passed away in 2015. He had developed dementia and his kidneys failed him. We were able to go on a mission together in 2007 to the Polynesian Cultural Center for a year. And he spent another 4 years as a Church Service Missionary at the Church Office Building. I'm doing o.k. I'm sometimes surprised that I am as old as I am, but my body tells me it's true. My middle daughter who is unmarried lives with me. Three of my other kids live nearby, Dave, the oldest is in Minnesota, and Cathy ,the next one, is in Saratoga Springs. I have such fun memories of when we were so young and so newly married. And even as our families were growing up, although we were in Iowa at that time. Dick was such a nice gentle man. Gordon admired him so very much. I'm sorry that when we finally moved back here to Ogden, that we couldn't get together again. Well, I suppose that the two of them are making up for that lost time by talking computers, photography and every thing else that they enjoyed. My prayers are with you that you will find peace and comfort knowing that he is still nearby and will most likely be one of your guardian angels....especially if you talk to him as often as I talk to Gordon now. (He doesn't answer back, but I know he is nearby). My love and prayers. June Booth
Comment Share
Share via:

Posted Jan 28, 2021 at 10:23am
We enjoyed getting to know Dick at running events several years ago. Great guy and a beautiful family. His daughter, Laurel, is one of the sweetest people I know. Praying the family and close friends will be blessed with peace and comfort. I hope this song I wrote will bring some sweet memories. https://www.youtube.com/watch?v=GhDWAhhPL1c
Comment Share
Share via:
DA

Posted Jan 27, 2021 at 07:08pm
I will miss seeing Richard walking in the park.
Condolences to you Connie and the rest of the family.

Posted Jan 25, 2021 at 10:10pm
Connie and family, so sad to hear of Richard's passing. We have always remembered his whistling and singing. He was so kind and helpful to me after Glen passed and I needed help with my computer. Always smiling and glad to see us when we passed in the grocery store or in and out of church. As we have taught and been taught for so many years, we look forward to that sweet reunion on the other side of the veil. May you have peace and comfort through this next journey as your press forward with many great memories. It was fun being your neighbor for all those many years. May you have God's blessings in the coming days.
Sincerely,
Karol Palmer 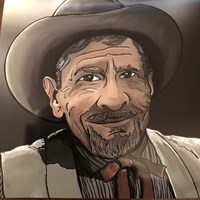 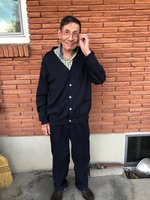 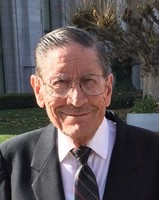 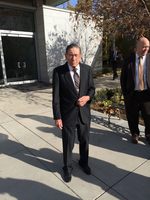