To share your memory on the wall of Robert Graul, sign in using one of the following options:

Bob was born on April 30, 1932 in Pittsburgh, PA to Edgar Graul and Hilda Schwarm. He grew up in an extended loving family on Spencer Avenue following his father's death in a car accident in 1940.

Bob's mother Hilda and her three children lived upstairs in a duplex built by her brother Oscar, who lived downstairs with his wife and two children. His family were faithful Christians, and he learned the joys of service and hard work from an early age. He graduated from Carrick High School and then graduated from the University of Pittsburgh with a BS in Electrical Engineering. Bob served as an officer in the Army Signal Corps in Philadelphia, PA following graduation.

Bob met Margaret Palmieri while they worked at the Signal Corps. She became his devoted wife and companion for over 54 years. Bob and Peg were married on June 14, 1958 and started their life together in Pittsburgh, PA where their two sons, Edgar and Gregory, were born. Later, while living in Toledo, OH, Peg, Bob and their two sons became members of the Church of Jesus Christ of Latter-day Saints. The family was later sealed for eternity in the Washington D.C. Temple while living in Willow Grove, PA.

Bob and Peg spent most of their married lives in Willow Grove, PA where they made many life-long friends. After living in PA for 37 years, Bob & Peg moved to Orem, UT in 2007 to be closer to their sons and their families. Bob often said how much he loved being with his children, grandchildren and great-grand-children. Bob and Peg took an aquatic aerobics class taught by Laura Bagshaw. Peg passed away suddenly at home on December 29, 2012. In the years following, Bob and Laura's friendship matured and they were sealed in the Mount Timpanogos Utah Temple on August 15, 2015. Laura brought joy to Bob as they shared a love of music, especially opera, and table tennis. Laura lovingly sustained and cared for Bob throughout their marriage.

Bob was a faithful and dedicated disciple of Jesus Christ. He joyfully looked for opportunities to serve others, whether in planning and leading congregational music, singing in a choir, being a temple ordinance worker, participating in the American Legion or simply by aiding neighbors.

Bob was preceded in death by his father, Edgar Graul, his mother, Hilda Schwarm, and his first wife, Margaret Palmieri. Bob is survived by his wife Laura and his sisters Ruth Dudt and Barbara Kelly. He is also survived by his sons Edgar (Elizabeth) and Gregory (Janet); six grandchildren: Michael (Amielee), Julia (Colton) Moffitt, Megan (Isaac) Alger, Robert (Lexie), Benjamin (Maggie) and Joseph; and six great-grand-children.

A viewing will be held on Friday, February 26, 2021 from 6:00-8:00 pm at the Walker Sanderson Funeral Home, 646 East 800 North, Orem, UT. Due to COVID, the funeral service will be restricted to family members only. The service will be held on Saturday, February 27, 2021 at 11:00 am and will be webcast online at www.walkersanderson.com. Interment will be in the Timpanogos Memorial Gardens Cemetery, 1000 North 400 East, Orem, UT.
Military Honors provided by American Legion Post 72.

In lieu of flowers, please consider donating to the Metropolitan Opera (www.metopera.org) or to your favorite charity.
Read Less

Posted Mar 10, 2021 at 11:36pm
Bob went out of his way to learn the name of our our daughter Kristen (she was our only daughter living at home when he and Peg moved into our ward) and the names of our 5 sons which was no easy feat given how much the boys looked alike when they were young. All of them of them looked up to him and respected his friendly and outgoing personality. More than once, each of them commented how much they loved how happy and friendly "Brother Graul's" always was, and how they wanted to be like that when they grew up. He always greeted our family by name, took an interest in our comings and goings and made up feel loved and known by him. He was a true Christian who gave love freely and worked to emulate Christlike love and service! He will be sorely missed by us! The Mellas
Comment Share
Share via:
TM

Posted Feb 27, 2021 at 10:52pm
Diane and I will miss Bob's friendly and upbeat ways. I mostly knew him through the ward choir, where Bob was a fixture. He was so obviously enjoying himself -- it was a pleasure to be around him. We pray for comfort for you after your loss.
Comment Share
Share via:
JH

Pam and I were able to replay the service this evening. It was very nice. We send our love and sympathy to you at this tender time.

Posted Feb 27, 2021 at 12:14pm
I will remember Bob as always reaching out with a warm smile and an energetic handshake. He showed genuine concern for others by providing caring service at every turn. Will miss this great man! - Dale Browne
Comment Share
Share via:

Posted Feb 27, 2021 at 10:36am
Bob Grual will be sorely missed in our neighborhood and our lives. Bob is the epitome of a good family man, good neighbor and man of God. When my mom Letha Burrell moved into the DaVinci neighborhood in 2009 it wasn’t long before Bob invited her to join his weekly organized temple group of single sisters. It was a wonderful way for my mother to get to know her neighbors and fit in to a new ward. When I moved up to live with my mother he quickly let me know I was also invited to join their Temple group. I will never forget when we met at Olive Garden to celebrate his birthday. The manager came out to meet him cause he wanted to see the man so many women admired enough to celebrate his birthday. Bob was admired for his kindness and service.

Bob had a way of always being ready to serve. He was up early every morning taking neighbors dogs for walks and putting our’s and other neighbors newspapers left on the driveways on our porches. If you walked with him he was always talking about something cheerful or the opera he had just listened too. He asked good questions about your own interests as a way to get to know you and become your friend. Once I mentioned I needed to get a new battery for my mom’s car and he asked a couple of questions and said, I have a solution for that. In minutes he was at our house with his special tool to fix the battery.

He often called or sent a text to let us know about musicals and operas and often invited us to go with he and Laura to enjoy musical productions. I think for the rest of my life when I hear an opera Bob will pop up in my thoughts. We will always remember him with the fondest of memories, with love and gratitude in our hearts to know we were counted as his friends.
Comment Share
Share via: 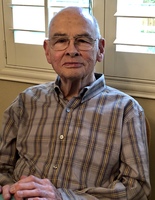