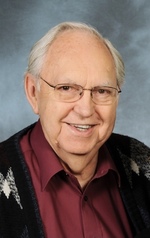 A Live Broadcast of services may be viewed at 12:00 p.m., Saturday, October 10, 2020 at www.walkersanderson.com, where condolences and memories may be offered to the family.
________________________
Robert Henderson Lundquist died at his home in Orem, Utah, on October 6, 2020, at the age of 89, after several years of Alzheimer’s Disease and recently suffering two strokes. He was born March 15, 1931, in Price, Utah, to Roland Crosby and Mary Katherine Henderson Lundquist. His family moved to Logan, where he attended kindergarten and later to Richfield, where he attended elementary school. They later moved to Kanab, where he graduated from high school. He had an older sister, Leila, and a younger brother, Kent.

After high school he attended the University of Utah, sang in the Mormon Tabernacle Choir, then served in Sweden as a missionary for the Church of Jesus Christ of Latter-day Saints. Upon returning home, he attended Brigham Young University in Provo, Utah, where he met Kathleen Caseman. They married in the Salt Lake Temple on August 26, 1955, and both graduated from BYU in 1956. Bob earned a Bachelor of Science degree in Accounting, with a minor in Radio and TV Communications, and was commissioned as a 2nd Lt. in the USAF Reserves. He then served two years active duty in the Air Force as a Radar Weapons Controller in the Air Defense Command in Florida, Arizona and Michigan, later serving several more years as a Major in the USAF Reserves at Hill AFB, UT.

He has been employed as an Accountant, Office Manager in the home construction business, business systems sales, and was self-employed in computer hardware and software system design and development for many years. His major career “claim to fame” was the design and development of the Compu-timer, the first microprocessor-based production management system, in the late 1970s. The Compu-timer system is on display at the Smithsonian Institute in Washington, DC. He was also issued multiple U.S. and foreign patents for business, sport, and household items.

A lifelong member of the Church of Jesus Christ of Latter-Day Saints, Bob served as a Missionary, Branch President, Bishop, member of the Tabernacle Choir, Ward Choir Director, volunteer at the Provo MTC and other leadership callings. He had a beautiful bass singing voice and had the privilege of singing for the Church in many countries of the world. While serving as a missionary in Sweden, he was recognized by the Swedish press for his singing.

Bob and Kathy have lived in Provo, Florida, Michigan, Arizona, Salt Lake, Ogden, North Ogden, Kaysville, Bountiful, Wyoming and most recently, Orem, UT. He is survived by his wife, Kathy, their 3 children and their spouses, Tracy Alder (Ron), Sue Widdison (Rick), Steve (Alecia), 11 grandchildren, 16 great-grandchildren, his brother Kent (Karen) and many nieces and nephews and their families. He was predeceased by three grandchildren, his parents, his sister and her husband, his wife’s parents and her sister, brother and their spouses.

A public viewing will be held Saturday, October 10, 2020, from 10:30am - 11:30am, at Walker Sanderson Funeral Home, 646 East 800 North, Orem, UT. Due to Covid-19 restrictions, all guests will be required to wear masks and socially distance. A private family service, by invitation only, will be held that same day at noon. It will be available to watch live at www.walkersanderson.com. Condolences may be offered online at www.walkersanderson.com.