To share your memory on the wall of Sharon Dawson, sign in using one of the following options:

When Sharon began school, she loved it and began at an early age to be a life-long learner. Sharon also had a beautiful voice and always enjoyed singing. After she finished high school, she attended Indiana Central College (now University of Indianapolis) where she and her sister, Lois, sang in a women's trio and traveled around performing to represent the college. After finishing one year of college, Sharon returned home, where her father allocated five acres of land for her to plant a tomato crop, to then use the proceeds to pay for college. However, a disease wiped out most of the harvest, so her crop failed and she did not have the funds to return to college. This was a great disappointment for her.

Sharon then met her husband, Richard Kennard Dawson. Sharon and Richard married on June 28, 1958. Together, they had six children. Sharon was an excellent housekeeper and a superb cook and always made wonderful meals for her family. She was especially famous for her wonderful, homemade pies and has passed the art of pie making down to her grandchildren.

Sharon was always a very religious person. Throughout her youth and into adulthood, she attended many different protestant congregations, but she was never fully satisfied with something about each one. When Sharon's children were young, the Apsleys, a highly respected couple in a local protestant congregation, joined The Church of Jesus Christ of Latter-day Saints. Some members of the congregation shunned them for joining those “Mormons,” but Sharon told them that if they were happy, she was happy for them. They then asked if she would like to learn more about the Church and she said yes, more out of politeness than a real desire. The missionaries came a few months later and began teaching the Dawson family. After they would leave, Sharon would tell Richard that she didn't think she believed this or that and he would challenge her saying, “why not?” Then she would have to think about why not and discover that she actually did believe it. But her real conversion came when Sharon read the Book of Mormon. While reading the Book of Mormon from cover to cover, she became so filled with the spirit that she knew the Church was true. She was worried about how she would have to give up coffee to be baptized. On the appointed day to quit, she got a big bottle of aspirin because she just knew that terrible headaches were coming, but miraculously, she never got a single headache.

Sharon was baptized on February 4, 1967 by Tom Waite, one of the missionaries who taught her. Sharon remained a faithful, active member of the Church throughout her life and was always a pillar of strength and testimony to those who knew her. Sharon always held a current temple recommend and attended the temple regularly. She also served in many callings including Ward Music Chairman, Choir Director, Chorister, Relief Society Second Councilor, and Compassionate Service Leader.

Sharon and Richard later divorced and Sharon moved to Utah. Since she had always regretted never finishing college, she decided to fulfill her dream. She attended Dixie State College, in St. George, Utah where she earned an Associate’s degree and Brigham Young University where she graduated with a Bachelor’s degree in English Literature at age 60.

After graduating from college, Sharon spent the next several years working various jobs in an effort to support herself, and to tenderly care for her daughter, Elizabeth, who struggled with severe health challenges. While in Utah, she spent some time living on her own, and with her son, Rick, and his family. She later shared her home with her grandsons, Ricky and Joseph. She also lived for a time with her son, Jim, and his family in New York and recently in Washington before returning to Utah for what turned out to be the remaining months of her life.

Sharon passed away on March 17, 2021, at age 84. She was preceded in death by her parents; her brother, Lance Cox; her sister, Olivene Cox Hargrave; her daughter, Elizabeth Claire Dawson; and her grandson, John Taylor. She is survived by her five sons: Robert (Bob) Kennard Dawson, Richard (Rick) Kennard Dawson Jr. (Leslie), James (Jim) Lee Dawson (Michelle), David (Dave) Lee Dawson (Rebecca), and Mathew (Matt) Cox Dawson; her 19 grandchildren, and 24 great grandchildren; and her sisters, Lois Cox Schnabel, and Barbara Cox Davis, two nieces and four nephews. Sharon was well loved by so many who were fortunate enough to know her and will be greatly missed.
Read Less

To plant a memorial tree in honor of Sharon Dawson, please visit our Heartfelt Sympathies Store.

Receive notifications about information and event scheduling for Sharon

We encourage you to share your most beloved memories of Sharon here, so that the family and other loved ones can always see it. You can upload cherished photographs, or share your favorite stories, and can even comment on those shared by others.

Posted Mar 22, 2021 at 09:43am
Sharon lived in our ward for some years while Elizabeth was trying to find a solution to her health challenges. Sharon brought a touch of class and dignity to our neighborhood, because that was part of who she was. She kept herself beautifully groomed and carried herself with grace. Her outlook (unless one of her beloved children was suffering, when she would suffer with them) was always upbeat. She was effervescent; she enjoyed company and her conversation was ever intelligent and interesting. She loved writing and in her latter years exulted in producing her magnum opus: her life story. I am grateful for my friendship with Sharon that has endured through the years.
Comment Share
Share via: 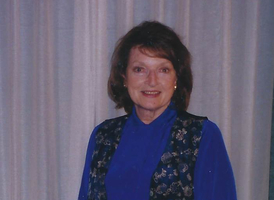