To share your memory on the wall of Theron Lamoreaux, sign in using one of the following options:

Print
Theron Albert Lamoreaux, 76, loving husband and father, passed away on December 16, 2020 at his home in Provo, Utah from complications due to a long illness.

Theron was born in Cedar City, Utah on July 11, 1944 to Homer & Rilla Lamoreaux... Read More
Theron Albert Lamoreaux, 76, loving husband and father, passed away on December 16, 2020 at his home in Provo, Utah from complications due to a long illness.

Theron was born in Cedar City, Utah on July 11, 1944 to Homer & Rilla Lamoreaux. He was the third of five children. His two older brothers Erwin and DelVar welcomed Theron then the three of them welcomed their brother Larry and later a baby sister Mona Lou completed the family.

His parents relocated them all to Provo, Utah when he was i n his early teen years and this is where he lived for the remainder of his life. He attended Provo High School where he enjoyed playing basketball. He got a job at the age of 16 at Riverside Country Club cooking on the grill and working in the kitchen showing he was always a hard worker.

Later, at the age of 25 he met Drenda Lou Robison and they say it was mutual love at first sight when they met at the Viaduct Cafe where Drenda worked as a waitress on Provo Center Street. He married Drenda Lou Robison on January 26, 1971. They had five children together; Stephanie, Mashelle, Timothy, Thomas, and Susan and were married for 49 (almost 50) years.

He continued his career at the Riverside Country Club at the base of Provo Canyon for over 35 years. He worked hard to care for his family. Through many years of dedication and hard work he worked his way up and finally held the position of Head Chef for many years. We could never remember a day that he missed work. That loyalty was one of his finest qualities.

Everyone who had the pleasure to eat what he prepared would tell you he had a definite talent in the culinary arts. His co-workers were very fond of him. He had to retire early in 2003 due to health issues.

When he was a young husband and father he liked to spend his leisure time in the summer
months at his family home helping his father and DelVar tend the garden, and they would plan
and go on fishing trips to Strawberry Reservoir, Utah with his wife Drenda, their five children,
and his parents Homer and Rilla and other family members. He had an easy going sometimes
even playful nature when he was with his loved ones making jokes and pranks to make others laugh. He also enjoyed going deer hunting every fall with his father Homer and brother Del Var.

When he was no longer able to get out and about he became an avid movie buff and western
movies were his favorite genre, although he had different things he seemed to enjoy watching especially if it pertained to nature and history, thrillers and even Space.

He loved BYU Football. He also enjoyed cooking at home for his family and friends and spending yearly holiday gatherings surrounded by his loved ones. He always had a kind heart and welcomed everyone but was camera shy and did not like to be the center of attention. He will be loved and missed dearly and will always be with us in our hearts.

To plant a memorial tree in honor of Theron Lamoreaux, please visit our Heartfelt Sympathies Store.

Receive notifications about information and event scheduling for Theron

We encourage you to share your most beloved memories of Theron here, so that the family and other loved ones can always see it. You can upload cherished photographs, or share your favorite stories, and can even comment on those shared by others.

Posted Dec 25, 2020 at 02:00pm
Dear Dad,
When you met my mom and me we were kind of alone in the world. She was a young single
mother trying to take care of me by herself. Working as a waitress at the café where you and
your brother Del Var used to frequent as young men. She told me that she brought me to work
one day and you immediately fell in love with both of us. Soon after, you two got married and
you gave me your name and my family.
I have four brothers and sisters; two grandparents; five aunts and uncles; and lots of cousins
that I never would have had in my life if you hadn't been the wonderful person that you were and
raised me as your own. I have so many wonderful memories of being part of such a large and
caring family. All of our yearly holiday family gatherings and all of the memories I have with my
brothers and sisters growing up are because of you.
I will especially cherish the memories I have of spending time with you at grandma Rilla and
grandpa Homer's house. I used to love helping you in the garden pulling weeds and picking the
vegetables when they were ready. The tomatoes were my favorite. I also loved helping grandma
Rilla with her housework and baking her famous chocolate cake and apple pie with a crust that
would melt in your mouth. I think you got your cooking talent from your mom. You also got your
kind heart from her too. I always felt like I was her real granddaughter because she always
showed me her love for me just like you did.
My other most favorite memories are of our fishing trips as a family to Strawberry Reservoir in
the summer months. You always made me feel special because you would take me out in the
boat to fish more than the other children. You told me it was because I caught more fish than
anyone else. I can still taste the rainbow trout that we caught and how delicious it was because
you had a magic touch when it came to cooking food.
That is the other thing I remember most about having you for a father. I didn't have to eat food
that didn't taste good. But, I've always compared your cooking to everything else I have ever
eaten and it rarely compares to anything you used to make. I've also tried to learn how to cook
like you from my memories of watching you cook. Sometimes I succeed, sometimes I don't, but
I'm never going to give up.
I am a better person today for having you as my father. I can never thank you enough. I hope
that where you are that you're at peace. I will miss you every day until we are all together again
as a family.
Love you always,
Stephanie
Comment Share
Share via: 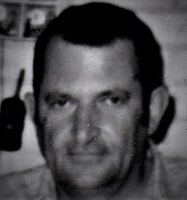 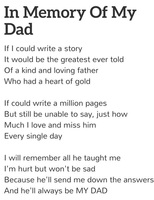 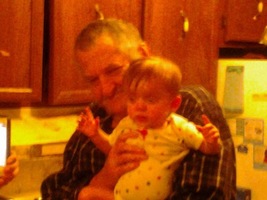