To share your memory on the wall of Tony Ingle, sign in using one of the following options:

Tony Ingle grew up in Dalton, Ga. After a knee injury ended his college basketball playing career, he set about chasing his championship dreams as a coach. He climbed the ladder in the coaching world from high school to college and had an amazing impact on many lives along the way. Some of his greatest achievements in basketball include being named ‘National Coach of the Year’ four times, winning a National Championship at Kennesaw State University (GA), a National Championship at Dalton State College (GA), multiple Conference and Region Championships and was the recipient of the National Association of Basketball Coaches (NABC) “Award for Advocacy”. Although he had much success in basketball, Tony Ingle is known to have said, “I didn’t coach basketball, I coached people.” He used basketball as a vehicle to teach his players and staff members life lessons. And Tony didn’t just teach it, he lived it.

With all the things Tony accomplished throughout his life, his greatest accomplishment is his wonderful family. Tony married Jeanne Whitworth Ingle on August 28, 1974 in Ringgold, GA. Jeanne introduced Tony to the Church of Jesus Christ of Latter Day Saints, he was baptized in 1976. They were sealed for time and all eternity in the Washington DC Temple on October 11, 1980. Tony loved serving his heavenly father and following the teachings of Jesus Christ.

Tony treated everyone like family. His quick witted humor and contagious personality made everyone feel comfortable and important. He always looked for the best in others and inspired them to be better people. Tony lived life to the fullest. His relentless work ethic and love for improving others has left a legacy that will last forever. Of all the quotes close to his heart, the one he used often to keep things in perspective is, “Life is short, serious and frail. Learn from it, laugh at it and live it well.”

His funeral will be held for immediate family only on January 25, 2021 at 12pm MST/2pmEST. However, everyone is invited to join via live webcast at www.walkersanderson.com.

A celebration of life will be held June 11, 2021 in Orem, UT. More info will be announced at a later date.
Read Less

Receive notifications about information and event scheduling for Tony

We encourage you to share your most beloved memories of Tony here, so that the family and other loved ones can always see it. You can upload cherished photographs, or share your favorite stories, and can even comment on those shared by others.

Posted Jan 25, 2021 at 03:58pm
What an amazing celebration of Tony's life. The speakers, the musical number (was incredibly beautiful), the closing hymn, and the tender closing prayer was just beautiful. I savored every minute of his funeral service. I loved Israel talking of what the "pennies" represented to Tony....Faith and Trust in God. I loved all his acronyms and quotes. I loved what was most important to Tony was that he was in God's Hall of Fame. I loved how he taught to always find something good in everyone you meet! I loved Golden talking about growing up and the hardships of not making a lot of money, but how they were so close as a family. I loved hearing about "The Little Nuggets"! I loved hearing about his conversion and Jeanne's determination and then Jeanne's determination also to support him in his dream of coaching! After the funeral, I went to youtube so I could listen to "Free Bird". I could hear Tony in the song. And our answer back to him on this song.......Will you still remember me? Yes, Yes, Yes, your life and the lives you have touched... you will be forever remembered! As hard as it is to say goodbye....and to not have you here cheering us all on is the knowledge that Heavenly Father needed your love, your kindness, your ability to always see the good in others, and your skill to motivate others do dig down deep and to become you God's need them to become. There is no doubt in my mind that he is going to be a great teacher, friend, and motivator up in the spirit world sharing his love.
Comment Share
Share via:

Posted Jan 25, 2021 at 03:39pm
I had the honor of knowing Tony while working at Dalton State. The world is a better place because of Tony...and many young men are better citizens because of his coaching. Those of us who knew him are lucky to have met him. Dalton State will forever remember this great man and coach. Good bless Tony....we will miss you.
Comment Share
Share via:
TB

Posted Jan 25, 2021 at 03:24pm
I had the HONOR of working with Tony at BYU. Truly one of my favorite people I have ever met. My favorite" "Ingelism" was many times he told me "Burnie (my last name is Byrne) I love you more than you love me". I would usually respond that this was not possible.
Though I was one of the few non LDS people at BYU Tony often addressed me as "brother Byrne" and I addressed him as brother Ingle. It was all about respect and love for each other.
It will always be a regret that I had not talked to Tony for a few years, but as the Ingle boys said today he is in our always in our hearts.
Love you Bother Ingle.
TJ Byrne
Comment Share
Share via:
CG

Posted Jan 23, 2021 at 01:36pm
My condolences go out to the Ingle family. Tony and I played basketball against each other in high school. We played together at Dalton State College. Tony was an outstanding point guard. His peripheral vision made him a dynamic ball handler. He also had a great sense of humor! Throughout the years, I followed Tony through his outstanding coaching career. I am so proud to say that Tony was a “good friend” of mine. Cleo Goodgame
Comment Share
Share via:
BC

Posted Jan 23, 2021 at 11:30am
One of the best gifts God has given me is to have been Tony's high school basketball coach. What a privilege it has been to watch him become a loving husband, father, championship coach--an inspirational person. Tony was a man of strong faith and had the belief that one person can make a difference. He was a role model for others. He dared to dream big and put in the work to make the dream come true. It is said that a true legacy is what you leave behind. And Tony left behind a legacy of caring for others. For doing the right thing and creating a magical belief that anything is possible. I am reminded of this quote when I think of Tony's life--"The purpose of life is to find your gift. The meaning of life is to give that gift away." It fits with one of Tony' s quotes " that if God gives me a day, I am going to live it to the fullest." He did that--an inspiration for all by a life well lived. And his wonderful family--Jeanne the love of his life and who Tony said was the best thing that ever happen to him. His five children will make sure his legacy continues. I guess God needed a point guard---and he got one of the best ever. He will always be in my heart and I will think of him each time I watch the games, go into a gym or just see kids shooting baskets. May God bless his family, give them peace and hold them close during this difficult time. 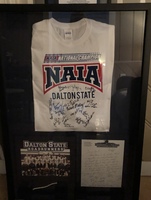 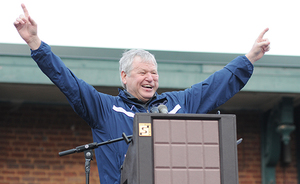 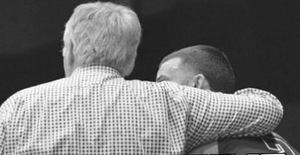