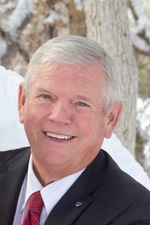 Wayne Ross Finnegan passed away, October 16th, 2020 at 9:46 AM, from injuries sustained in an accident. Wayne was born May 30th, 1944 in Anaconda, Montana to Elmer & Catherine Finnegan. He grew up there and graduated as a Copperhead at Anaconda High, where he participated in track and basketball. Some fond memories include shooting a homemade rocket with his younger brother Floyd & friend Pudgie, with a tiny rubber monkey inside, resulting in a small fire & a stern talk with a policeman. The monkey was never recovered. Another was in 1955, collecting Christmas stories about Santa & the Dumdiddy, which are treasured and passed down through his family.

He then joined the Air-force & met a Scottish lass, his soul-mate Valerie, on a base in Nebraska. They were married on Valentine’s Day in 1967 in the Idaho Falls Temple for time & all eternity. On that day, she knew that he would always keep her safe and would lead her back to their Savior. They went on to have 1 daughter and 4 sons whom they raised in Orem, Utah. All would describe him as the best dad, who they knew always loved them. They raised their kids on hard work, service, and Faith in Jesus Christ. After the Air-force, he joined the Army reserve as a medic. He served in the military for a total of 25 years. Wayne graduated from BYU in History & Physical Education. He worked at the BYU Bookstore & MTC Bookstore as Manager for 39 years before retiring.

Wayne served in the Boy Scouts for 40 years helping 100s of young men to gain their Eagles & attended countless campouts where he served his specialty pancakes & his “everyone add a can” Chili. Ultimately, he was awarded the Silver Beaver for his distinguished service. From 2011-2012 Wayne and his sweetheart served a mission in Tacoma, Washington on the Naval Submarine Base Bangor, where he shared his deep love of the Savior, with power, to the military families in that area. On their last Sunday, all those in the military dressed in their best, to honor & show their love for them.

He was the type of man that was always there with his sweetheart, be it a birthday, homecomings, mission farewells, weddings, holidays, a graduation, or performances. He was always giving, from his large red tomatoes to cans of food, to numerous other items, for his newly wed children or grandchildren. He was an avid BYU Fan and loved going to & watching their games. He had a deep love for his country and taught his grandkids and great grandkids how to retire the flag respectfully & with honor. His hobbies included poetry, choir, swimming, gardening, walking, genealogy, daily reading of his scriptures & reading about history, lunch with friends, hiking, volunteering at BYU or the MTC, perfecting dad jokes & doing anything with family. He participated in the senior Olympics as an awarded swimmer & placed 1st in javelin throwing. He & his Val won several trophies in the annual family Halloween Party over the years, always surprising their family with amazing costumes. He made a mean Spaghetti with meat sauce & loved to make microwave popcorn for the grandkids. His smile was contagious, & his testimony of the Savior was deep, always shared with tears in his eyes.

For the last several years, Wayne has collected cans & strip wire to donate money to the Humanitarian Fund. In lieu of flowers & to honor his legacy please donate there. https://philanthropies.churchofjesuschrist.org/humanitarian-services.

His public viewing will be held on October 29th, 2020 at 7:00-8:30 PM at the Walker Sanderson mortuary. 646 E 800 N Orem, UT 84097. Social distancing and masks are requested. On October 30th a small, private funeral service will be held at the Orem City Cemetery at 10 AM for his family. Others, unable to attend, can join via Live Webcast in their homes. https://www.walkersanderson.com/webcast